The Disbandment of the Irish Regiments, 1922: Consequences and Continuities

This symposium will discuss the disbandment of the regiments, and its consequences.  The impact upon recruitment for the Ulster regiments, for the Irish Guards, for the Royal Navy and Royal Air Force, and for ancillary services such as the Queen Alexandra’s Nursing Corps, the A.T.S., the Wrens and the WRAF will also be explored.

Tickets for general admission cost €15, Students may attend for Free.

On 31 July 1922 British Army Order No. 78 was implemented. This was to effect the disbandment of six of the British Army’s Irish Regiments.  These were: 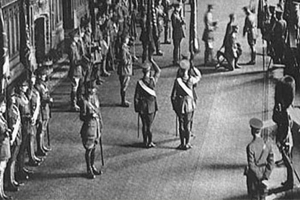