‘UNresolved’ (18 minutes) is a haunting memorial to the victims of genocide of the Bosnian war of 1992-95, with particular reference to the massacre of Srebrenica. Some tried to escape and were killed; others survived to give harrowing reports of what they had seen. There are accounts of resistance and survival, testimonies from young Ducth
soliders who were serving in Srebrenica and conflicting accounts from the UN personnel and Serb military commanders.

‘MANIFESTO’ (18 minutes) invokes how the 1916 Irish Proclamation of Independence has been compromised as Ireland has become the most globalised economy in the world where so many people in the country today are forced to live in
‘a permanent state of crisis’ while multinational corporations maintain huge profits.

ANTHONY HAUGHEY is an artist, lecturer and researcher in the Dublin Institute of Technology. His artworks and research have been widely exhibited and published nationally and internationally and his documentary film Manifesto has been acquired for the permanent collection of the Arts Council in Ireland.


This Screening is organised by Trinity Centre for Post-Conflict Justice, ​Irish School of Ecumenics and Department of Sociology (TCD)

As places are limited please register before 10 November 2017 : <fernanla@tcd.ie> 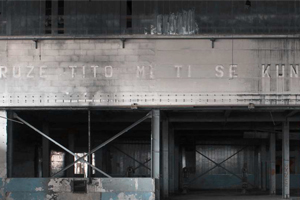