3rd November 2017 is the centenary of the birth of Conor Cruise O’Brien (1917-2017), one of Trinity's most distinguished graduates, and perhaps Ireland’s leading public intellectual of the past half-century. To commemorate his life and work, the Trinity Long Room Hub is hosting a two-day symposium exploring the impact of his various roles on literary criticism, historiography, diplomacy, and politics at home and on the world stage.

There is also a public lecture ' Conor Cruise O'Brien: A Centennial Appraisal' on the 2nd Nov at 7pm that will be opened by Trinity's Chancellor and former President of Ireland, Mary Robinson and will include a paper 'Conor Cruise O'Brien, a centennial appraisal' by Frank Callanan, S.C. and author of The Parnell Split.
Register here for this evening discussion lecture
DAY 1: Thursday November 2nd

Paul Bew, Professor of Irish Politics, Queens University Belfast, and Chair of the Committee on Standards in Public Life, UK: ‘Channelling Burke in the 1990s’

‘The Tracks and Tracts of Conor’s Own History’

Noel Dorr, Former Secretary General of the Department of Foreign Affairs: ‘Ireland, Conor, and the UN’

Geoffrey Wheatcroft, Journalist and Writer: ‘An Irishman who thinks he’s a Jew’

Cameron Duodu, Novelist, Journalist and Critic: ‘The Intellectual and the Dictator: Conor Cruise O’Brien in Ghana’

Welcome by the Chancellor of Trinity College Dublin, Mary Robinson

9.30am – 11.45am, Panel FIve: ‘‘What humanity, reason, and justice, tell me I ought to do' – Cruise O’Brien on Edmund Burke, the Enlightenment, and the Founding Fathers'

Susan Dunn, Massachusetts Professor of Humanities at Williams College, Mass: ‘The Importance of Moderation: Burke and the American Founding Fathers.’

Stephen Collins, Columnist and former Political Editor, The Irish Times: ‘Working from within and attacking from without: Conor Cruise O’Brien in Politics and in Journalism’

Stephen Kelly, Senior Lecturer, Liverpool Hope University: ‘“I was altogether out of tune with my colleagues over Northern Ireland”: Conor Cruise O'Brien and Northern Ireland, 1969-1985’

Address by Niall Burgess, Secretary General of the Department of Foreign Affairs and Trade

Registration for this event is now closed. There are still seats available for the public event on Thursday evening, 'Conor Cruise O'Brien: a centennial appraisal' .Those interested in particular panels in the symposium are welcome to turn up on the day to look for returns - we do not anticipate that all those who registered will attend every panel. 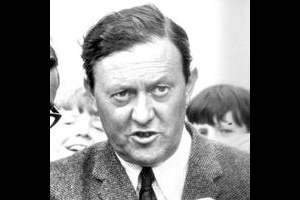