Russia’s October Revolution was one of the most consequential events in modern history. It helped ensure that the ultimate fate of the Russian Revolution would be far removed from the spirit of freedom and democracy that seemed so promising in 1917. When we think of the Russian Revolution, it is difficult not to be aware that it failed, and that its story is bound intimately with the complex relationship between utopia and dystopia. The Soviet state that resulted from the Revolution soon became extraordinarily violent and repressive, and ultimately it collapsed – along with the legitimacy of its ideological basis - having lasted for seven decades.

This talk, to take place almost exactly 100 years since the start of the October Revolution, will provide a centenary perspective on Lenin the man and Leninism the ideology. It will do so by appraising Lenin’s significance in 1917, before addressing a simple but crucial and much-overlooked question: What was the October Revolution actually for? The lecture will explain the content of Leninism as a body of political thought, and why it matters. It will conclude with some reflections on the question whether or not Leninism should be considered to have any relevance in our world today.

Dr James Ryan is lecturer in Modern European (Russian) History at Cardiff University. A graduate of University College Cork and a former recipient of a Government of Ireland Postdoctoral Fellowship, he is the author of Lenin’s Terror: The Ideological Origins of Early Soviet State Violence (London, 2012). He is currently working on an intellectual history of Soviet state violence, 1918-1941. He is a Fellow of the Royal Historical Society. 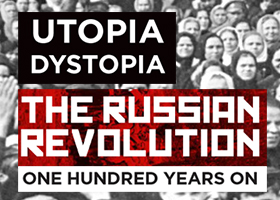