The Endgame Project at The Samuel Beckett Theatre

This special preview screening of a new documentary by Jim Bernfield takes place as part of the public program of The Samuel Beckett Summer School.

Dan Moran and John Christopher Jones represent six decades of acting between them. They have appeared on Broadway, off-Broadway, in regional theatre, in films, and on TV. They met in 1995 while sharing a dressing room in the Broadway production of A Month in the Country. Now they share another bond: both have Parkinson's disease.

In spite of this, Dan and Chris continue to work as actors. A new documentary film, The Endgame Project, shines a light on their daily battle against the disease while putting up a production of Samuel Beckett's darkly comic play Endgame.

The Samuel Beckett Summer School is pleased to partner with the filmmakers and the Samuel Beckett Theatre in presenting the first European special preview screening. The film will be introduced by Patrick Bixby with a brief period for audience discussion to follow. The event will be moderated by Jonathan Heron.
Read more about the project: www.theendgameproject.com


The seventh annual Samuel Beckett Summer School begins on 30 July and runs through 4 August 2017. Registered participants will enjoy two lectures per day, a week of intensive seminars, and evening events. For members of the college community or the public who would like a briefer engagement with the work of one of Trinity College Dublin's most illustrious alumni, we again offer a "public programme" of selected events at the cutting edge of research into Beckett in context and Beckett in performance. This year there is a focus on Beckett in digital, medical, and broader artistic (visual arts) contexts. All events are €10 and can be booked in advance through Eventbrite. See descriptions and links below:


See www.beckettsummerschool.com for additional updates, and watch the Trinity Long Room Hub website for news about the launch of the Trinity Centre for Beckett Studies in Autumn 2017: there is a full year's worth of Beckett programming ahead. 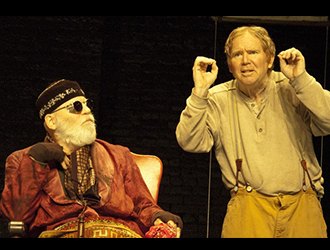