Declarations of practical, political, technical, or ideological impossibility may seem at first glance like dead-ends. However, they can subsequently act as provocations to consider the problem in question more creatively. For example, in 2012 Mo Yan stated that censorship is as necessary as airport security but argued that writing literature is about transcending politics.

In performance studies, the notion of unperformability has not been adequately theorised. This is despite plays being frequently labelled unperformable by theatre professionals with regards technical constraints or a perceived lack of interest for live audiences. There has also been considerable work on the fear and repression of performance practices, from Jack Goody’s seminal Representations and Contradictions (1997) to the Observatoire de la vie littéraire’s ongoing project on the hatred of theatre.

The concept of untranslatability, on the other hand, is old in translation studies, but continues to gather substantial interest. Barbara Cassin’s Dictionary of untranslatables (2014) has become a bestseller, and there is a thriving discussion among theoreticians about the supposed impossibility of translating certain terms or even texts between languages. As for practice, it has informed, contradicted and ignored theoretical debates. For instance, Schopenhauer attempted to translate Kant despite having previously declared his work untranslatable, and for experimental groups such as the Outranspo, the notion of untranslatability constitutes a challenge to provide a translation.

The aim of this conference is two-fold. First, it seeks to uncover the relationship between unperformability and untranslatability, to establish correlations between the two terms and underlying paradigms. Second, it aims to subvert the notions in the two respective fields, by suggesting that what is, in fact, denoted by them is simply unrealised potential. 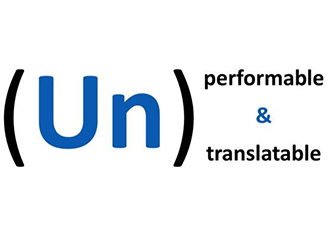