In the Name(s) of God: The Missiological Quest for Equivalence in East Asia

A public lecture by Dr Kevin Cawley (UCC) organised by the Trinity Centre for Asian Studies.

Abstract: Translation marks the beginning and the end of any mission strategy in a new cultural environment, where translation should be thought of as more than merely translating words – but also ideas and messages – by adapting to local contexts.

This presentation will provide an overview of the emplantation of Catholicism in East Asia. It will highlight the translational issues that arose by trying to translate the name(s) of God, and the message of Christianity into a very different intellectual and religious context. The first part will highlight the particular mission mishaps that the Jesuits first faced when they entered Japan, led by (Saint) Francis Xavier (1506-1552). Initially misled by misinterpretations and an unwillingness to adapt to the local ways, Alessandro Valignano (1539-1606), who later oversaw the missions, implemented a successful strategy of adaptation, which focused on language training. When the Jesuits entered China, with missionaries handpicked by Valignano himself, language and culture were seen as the main tools of evangelisation, while the name(s) of God and the message of the Catholic faith came later. Matteo Ricci (1552-1610), an Italian Jesuit, was the most successful translator of ideas from this early stage of emplantation in China, adapting to Confucian ways, even dressing as a Confucian, translating the Christian message, and the name(s) of God, into a Christo-Confucianology that attracted many converts. Ricci’s most important work, Tianzhu shiyi, (天主實義;The True Meaning of the Lord of Heaven) also had another important effect: it led a group of Korean Confucian scholars to convert to Catholicism before any foreign missionary had even entered the country. This unexpected effect will be the focus of the final part of this paper, as we see how Koreans translated Christianity into their own context, opening up new possibilities for Being-in-the-world.

Biography: Dr Kevin N. Cawley is formerly a graduate of Trinity College Dublin, and is currently the head of the department of Asian Studies at University College Cork, where he is also director of the Irish Institute of Korean Studies. He has lived in South Korea for several years and was awarded the prestigious Kyujanggak Fellowship to Seoul National University, the country’s premier university. He lectures on the religious and philosophical traditions of East Asia, focusing on Korea, and is currently preparing a book on this subject for Routledge. He has published many articles and book chapters on Korea’s intellectual history, often engaging with contemporary critical theory, and is particularly interested in acculturation between traditions, in particular, between Christianity and Neo-Confucianism in the late 18th /early 19th century. 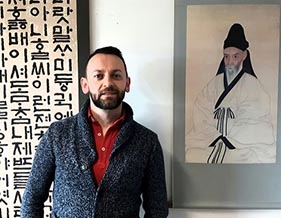