The Archives and Records Association (UK and Ireland) has awarded the prestigious Ellis Prize to the Virtual Record Treasury of Ireland, marking the first time the prize has been presented to a group rather than an individual. The Virtual Treasury comprises five core partners, the National Archives, Ireland, The National Archives (UK), the Public Record Office of Northern Ireland, the Irish Manuscripts Commission and The Library, Trinity College Dublin.

The award, considered the ‘Oscar’ for the recordkeeping sector, has been given for only the tenth time in 50 years. It will be presented at an event at the Royal Society of Antiquaries of Ireland this evening [November 21 2022]. 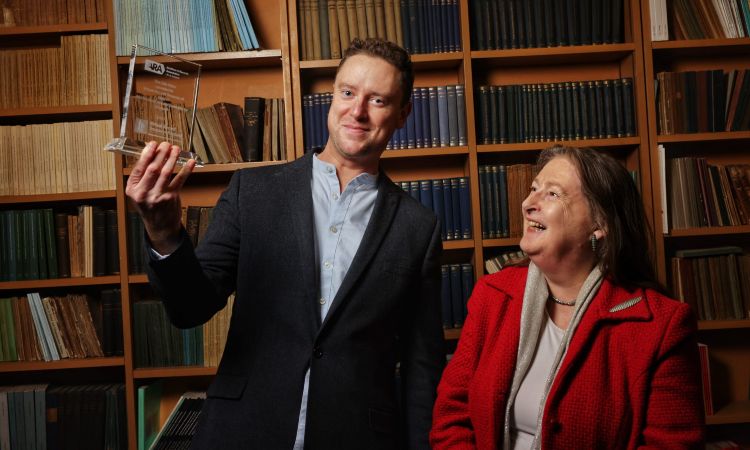 Dr Peter Crooks, Academic Director of the Virtual Record Treasury of Ireland, and Aideen Ireland, President of the Archives and Records Association (UK and Ireland).

The Virtual Record Treasury of Ireland is a research programme working to digitally recreate the state archives destroyed by fire in 1922. Led by Trinity College Dublin the Virtual Treasury is funded by the Department of Culture under the Decade of Centenaries Programme (2012-2023).

Since the launch of the Virtual Record Treasury in June 2022, the public has been able to ‘step back in time’ to explore a virtual recreation of the Public Record Office of Ireland and its collections, as they were on the eve of their destruction at Dublin’s Four Courts at the outset of the Civil War.

The project demonstrates to the global record-keeping sector what can be achieved with innovation and imagination, through the use of new technology and through trans-national and trans-sectoral collaboration. It brings hope to other nations who have lost similar cultural treasures through acts of war and natural disaster.

The award recognises the programme’s collaboration with over 70 libraries and archives worldwide, and its ground-breaking efforts to deliver back to the Irish nation and its diaspora more than 700 years of Irish history and culture, though a free, permanent and growing online resource.

The Ellis Prize was set up by Roger Ellis, who served in the Monuments, Fine Arts, and Archives Section of Civil Affairs of the Western Allied Armies during the Second World War. Known as the ‘Monuments Men’, this group’s task was to protect cultural treasures, so far as war allowed.

Ellis is noted particularly for the salvage of the library of the Colombaria Society, Florence in 1944, which held codices, incunabula, manuscripts, and books and had been damaged by a combination of explosions, fire, and rain. The links to his past work in awarding this prize to the Virtual Record Treasury of Ireland are clear.

Like Ellis in Florence, in 1922 the staff of the Public Record Office in Dublin worked to salvage what was left of their archives. Recently, in the capable hands of the conservation team in the National Archives of Ireland, these ‘Salved Records’ rescued from the rubble, emerged from their wrappings to become one of the most captivating aspects of the research partnership that became the Virtual Record Treasury of Ireland.

Aideen Ireland, President of the Archives and Records Association (UK and Ireland), said:
“The Virtual Record Treasury of Ireland shows what can be done through new technology and genuine collaboration, and how archives sit at the centre of a nation’s identity and culture. It offers hope to countries where cultural identity is lost or threatened by war, climate catastrophe, natural or man-made disaster – currently in Ukraine, or recently in Afghanistan, Syria and Mali. I am thrilled to award the Ellis Prize to this excellent venture and look forward to seeing its development over the coming years.”

“This award recognises the ground breaking nature of this collaboration between archival, academic and technological partners.  As part of the Decade of Centenaries 2012 – 2023 National Programme, Beyond 2022 has been one of its most innovative and ambitious legacy projects.  The National Archive is privileged to be the successor institution to the Public Record Office (PROI) and through this project we are honouring the incredible commitment of the former staff of the PROI in 1922, who worked tirelessly to salvage what they could from the burning rubble.  Our vision through this project has been to reconstruct the virtual treasury and the lost records as a timeless testament to their work over 100 years ago.”

"The award of the Ellis Prize is an extraordinary honour for the Virtual Record Treasury of Ireland, and a fitting tribute to the power of collaboration. Our work to restore a lost archive has been enriched immeasurably by the generosity of over 70 archival partners. I am delighted to accept this Prize on behalf of the entire partnership — from London to Lifford, from Cambridge to Canberra. We look forward to deepening these collaborations and, together, driving innovation in the creative exploration of digital archives."

“The Ellis Prize is a fitting recognition of the outstanding work of the Virtual Record Treasury of Ireland. I want to congratulate the entire team involved in this fantastic project. In particular I want to commend the researchers in our Department of History and in the ADAPT Centre in our School of Computer Science and Statistics who worked so creatively to make this resource available to the public. This skilful combination of historical research and technical innovation is hugely inspiring.

“Technology should be at the service of society and, having watched this project evolve over the past four years, it gives me great pride to see that recognised today.”

Archives around the world join forces to bring Ireland’s destroyed Public Record Office back to life.