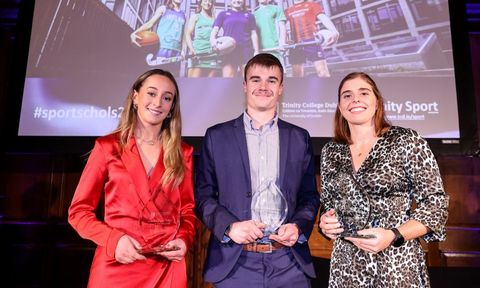 (Pictured at the event were Laura Noble, Sam Hickmott and Katie Mullan)

Trinity Sport unveiled its sport scholars for the 2022 / 23 season on Monday, 21st November at an event for family and friends at the Dining Hall, Trinity College Dublin. This year’s awardees, comprising 27 Trinity Sport scholars and 33 club academy scholars will represent Trinity this season in a wide variety of sports including rugby, basketball, GAA, rowing and cricket.

Sadhbh Doyle, Gavin Hoey and Harry Sheridan were recognised as Trevor West Sport Scholarship athletes for their contribution to their respective sports at Trinity and outstanding performances. Giulia Anderlini and Niamh Kenny were recognised as K.O Lee Basketball sport scholarship athletes. This is awarded is in association with Trinity Meteors, this scholarship is in memory of K.O. Lee, Trinity alumnus and coach of the Meteors Ladies Basketball team in the 1970s.

Linda Doyle, Provost, Trinity College Dublin commented on the night, “I would like to congratulate all our student athletes who are receiving scholarships. It is impressive to see how they balance their commitment to sport with their commitment to their studies. This takes a lot of hard work and dedication. The scholarships will enable our student athletes to continue to pursue their passion for sport while also benefiting from the excellent educational opportunities at Trinity. I am delighted to celebrate the students’ achievements and award these scholarships in recognition of such exceptional sporting ability.”

Michelle Tanner, Director of Sport and Physical Activity, Trinity College Dublin said, “We’re delighted to be celebrating the strongest calibre of student athletes that we’ve had for many years, certainly in the history of the Trinity Sport Scholarship awards programme. It is quite outstanding the number and level of student athletes that we have in Trinity including international, senior county and academy pathway athletes. We’re very excited about their prospects and potential over the coming months and years.”

Prof. Catherine McCabe, Dean of Students, Trinity College Dublin commented, “To our student athletes, congratulations on receiving a place on this year’s Trinity Sport Scholarship Programme. This scholarship recognises your achievements so far, and importantly, your potential to go even further. All of you here today come from a wide range of sports, including athletics, basketball, GAA, rowing, cricket, and rugby. It is our commitment to ensure all our student athletes get the full support and backing of the University to compete regionally, nationally and at international levels while also being able to excel in your academic course.”

Among those on the high-performance pathway and celebrated on the night were: 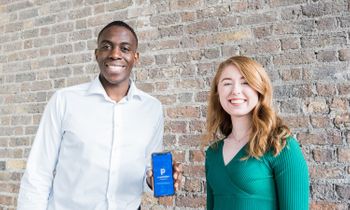 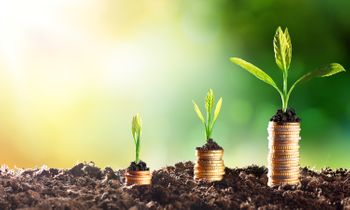