The Línte na Farraige project’s visual light installations, by Finnish artists Timo Aho and Pekka Niittyvirta, indicate the projected rise in sea levels from future storm surges. Installations will open at Spanish Arch, Galway, and will be followed by other coastal locations in the coming months.

The future surge heights marked by the installations are based on emissions scenarios from the recently published Intergovernmental Panel on Climate Change (IPCC) Assessment Report 6 (AR6), and from Irish tide gauge data.

Línte na Farraige is a collaborative project inspired by the stunning light installations of Finnish artists Timo Aho and Pekka Niittyvirta. This art and science collaboration involved scientists from Trinity College Dublin and Maynooth University, the Climate Action Regional Offices (CAROs) and Local Authorities, as well as designers from Algorithm and Native Events.

Línte na Farraige is a recipient of the inaugural Creative Climate Action fund, an initiative from the Creative Ireland Programme in collaboration with the Department of the Environment, Climate and Communications. 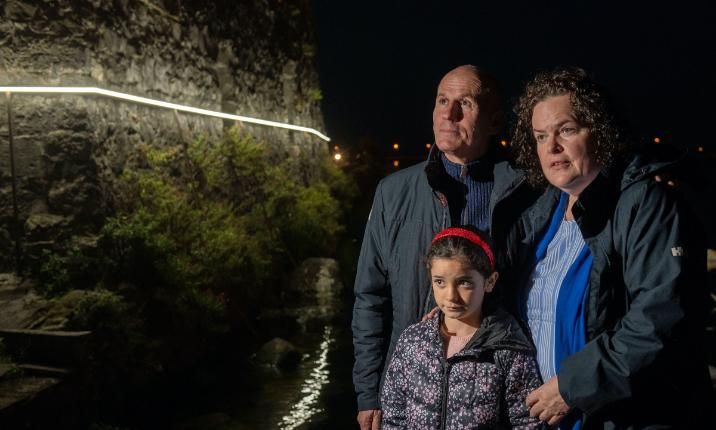 The first installation will launch at Spanish Arch on Thursday 29th September and will be followed by other coastal locations in the coming months.

Solar panels and renewably powered battery packs will be used as part of the installation to power the lights, which will only turn on twice per day during a rising tide.

Dr Zoë Roseby, Research Fellow in Trinity’s School of Natural Sciences, is one of the scientists involved in the project. She said:

“We have chosen to place these striking installations in locations of local significance to promote cohesion and action among communities. The goal of the project is to provoke a dialogue around rising sea levels and to demonstrate that the future is still in our hands, as the rate and amount of future sea level rise depends – largely – on our greenhouse gas emissions.

Sea level rise predictions used in this project are largely based on data in IPCC AR6, which was released in August 2021. These data predict a global sea level rise of between 0.28 and 1.01 m depending on the emissions scenario (low to very high respectively) by the end of the century.

Since sea levels were first measured in Galway in 1842, they have risen 25-30 cm. In recent years, Galway has become the go-to for reporting on coastal flooding associated with storms. Storm surges occur when strong winds drive water in the direction of the coast. The impacts of these events are then exacerbated by high spring tides.

In January 2018, Galway city was flooded following Storm Eleanor. This event coincided with a high spring tide, and the water levels rose 90 cm above the base of the Spanish Arch in Galway. The line of light indicated by the Línte na Farraige installation at the Spanish Arch is 1.9 m.

This is indicates the predicted rise in sea levels in a similar storm surge in 2150 when sea levels have risen by 1 metre — a moderate climate change scenario.