Trinity’s leading researchers and inventors have been recognised for their innovative research and entrepreneurship at the 2022 Trinity Innovation Awards. Orla Hardiman, Professor of Neurology, received the headline Provost Innovation Award, while Werner Blau, Fellow Emeritus in the School of Physics, won the Lifetime Achievement Award 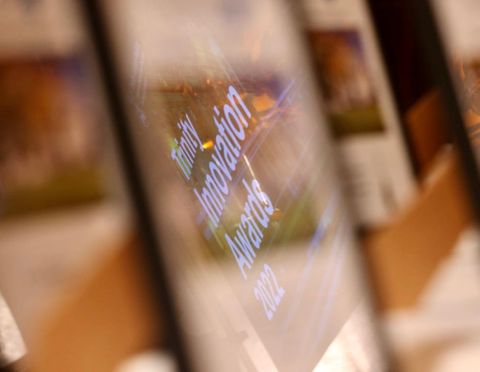 Professor Hardiman, Head of the Academic Unit of Neurology in Trinity and leader of the SFI Precision ALS Spoke, is also a PI at the SFI FutureNeuro and ADAPT Research Centres. She is founder and director of the National ALS/MND Clinical and Research Programme, and the HSE National Clinical Lead for Neurology.

An exceptional clinician scientist and an established world authority on the causes, diagnosis and treatment of Motor Neuron Disease (also known as Amyotrophic Lateral Sclerosis, ALS), Orla has established the world’s longest-running ALS register in Trinity, co-founded TRICALS – which brings together 48 research centres in 16 countries to improve clinical trial design – and transformed our understanding of the genetic causes of ALS, as well as revealing biomarkers of the disease and led innovations in care and digital healthcare. 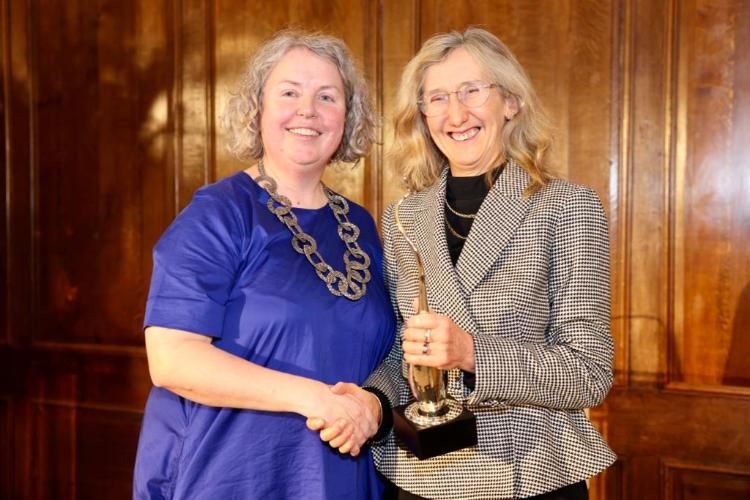 “I want to congratulate all the recipients of this year’s Trinity Innovation Awards. Innovation in Trinity has its roots in rigorous academic research and it is striking to see such a wide range of disciplines – from history to zoology – represented among this year’s winners. These innovations are addressing a wide range of issues such as the need for more reliable broadband, a diagnosis for Parkinson’s disease and a better understanding of ageing in people with intellectual disabilities.

“In particular, I am absolutely delighted to present Prof. Orla Hardiman with the Provost’s Innovation Award. Orla is a global authority on the causes, diagnoses and treatment of Motor Neuron Disease. She has an outstanding record of clinical and academic achievement, coupled with significant international and interdisciplinary collaborations. As the HSE’s National Clinical Lead for Neurology, as a consultant neurologist at Beaumont Hospital and as Trinity’s first Professor of Neurology, she strives to improve the lives of people living with Motor Neuron Disease by developing highly innovative approaches in her research and in her collaborative partnerships.

“I would also like to thank the Trinity team for organising this event and for supporting our researchers with their expertise in critical areas such as technology transfer.”

“We are delighted to again recognise the inspiring work of our colleagues who consistently translate their excellence in research into impactful innovations, providing solutions across a broad range of areas such as health, heritage, communications, robotics and materials. We also welcome this year’s campus company founders who continue to exploit Trinity’s deep tech capabilities in launching investable spin-outs.”

Professor Werner Blau joined Trinity in 1983 and from 1992-2007 he was Research Director of the Materials Ireland Polymer Research Centre, which worked closely with indigenous Irish plastic industries for all sectors, including electronics, medical devices and materials processing. He is regarded as one of the Irish pioneers of nanotechnology, has been cited over 23,000 times according to ResearchGate, and is a co-inventor on at least five patent families.

Since joining Trinity he has supervised over 100 PhD students including Professors Valeria Nicolosi and Jonathan Coleman, who have become key Trinity innovators and globally recognised research leaders. Werner’s work on the interaction of carbon nanotubes with polymers opened a new field within physics and led to patented technology that was subsequently licensed to US companies Unidym Inc. and Ensyse Inc. 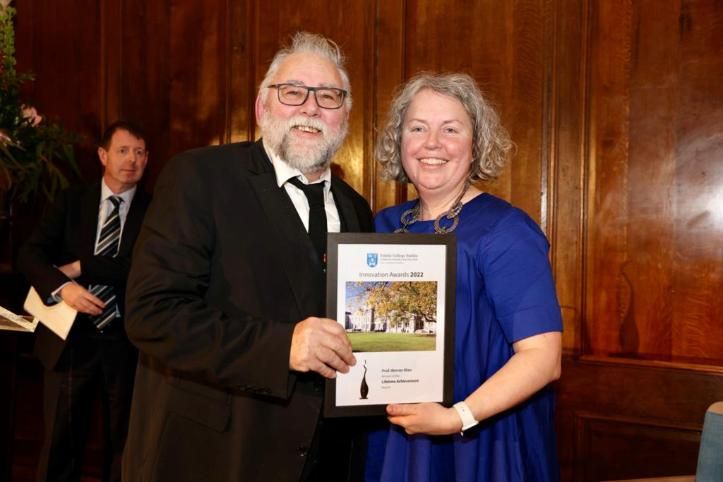 Professors Conor McGinn, who founded Akara Robotics, and Gerard Boyle, who founded Head Diagnostics Ltd, were honoured within this category.

Conor, an Assistant Professor in the School of Engineering, has raised pre-seed funding and employs eight people on the Akara team, while Gerard, Principal Physicist at St James’s Hospital, is completing fundraising for his company’s handheld medical device used to diagnose concussion and Parkinson’s disease.

Marco, who holds over ten patents and collaborates with the likes of Vodafone, Meta and Intel, focuses his research on using data extracted from a live network to train and tune software control algorithms. Ed, who focuses on using biodegradable microparticles, (alum and chitosan) to build better vaccines, recently licensed two patent applications in a joint spin-out (Ailsevax) providing immunotherapy for cancer.

Lewys is spinning out a company (turboTEM) based on products developed at Trinity, Ian leads multiple projects that apply emerging digital tech in environmental settings with the aim of boosting biodiversity and enhancing sustainability, and Triona is engineering next-gen materials for use in biological settings.

Mary is founder and principal investigator of IDS-TILDA, the longitudinal comparative study on ageing in persons with intellectual disability, including those with Down Syndrome. This global first programme drives change on healthcare practice and policy. Peter is founding director of the Beyond 2022: Ireland’s Virtual Record Treasury project, which has created a VR reconstruction of the Public Record Office of Ireland and its collections, which were destroyed at the beginning of the Irish Civil War in 1922.

Jacintha is a global leader in translational cancer biology and has many patents to help drive the innovation and commercialisation of her research, which includes new precision medicine approaches to tackling solid tumours and gene therapies for gastrointestinal cancer. Stephen takes an interdisciplinary approach to seeking new clean energy technologies and works closely with the likes of Ryanair, Total Energies and Siemens to ensure his research makes societal impact via the companies it can most impact.

Ann-Marie has worked with four different partners to share her academic expertise – Chrysea Labs, Clarochem Ireland, NIBRT Services Ltd., and E-Scape Bio, a Californian start-up. Nessa and Ann have worked closely to nurture a strong collaboration that has developed the impact of the Learnovate Technology Centre in addressing the future needs of workers and learners.

Altach Biomedical aims to become the gold standard in cartilage repair and the treatment of mild to moderate osteoarthritis; Starling Surgical provides a wound closure device, as fast as a skin stapler and with the clinical advantages of a suture; Swan offers a new AI-driven body scanning technology for fashion eCommerce, enabling online retailers to sell more clothes, without the returns; and VoiceTune is a cloud-based Text-to-Speech AI platform that takes input text and automatically generates high-fidelity, expressive speech with emotions.