Tadhg is a junior sophister Mechanical & Manufacturing Engineering student at Trinity and Eoin is a PhD student at TU Dublin, where he is co-supervised by Dr Sajad Alimohammadi (TU Dublin), Dr Tim Persoons (Trinity) and Xiangjie Chen from Loughborough University.

The pair were successful with their additively manufactured aluminium heatsink – an innovation developed to address a real-world engineering problem. Their design had to cool an asymmetric heat load, while considering limiting factors such as size constraints, material, and manufacturability. 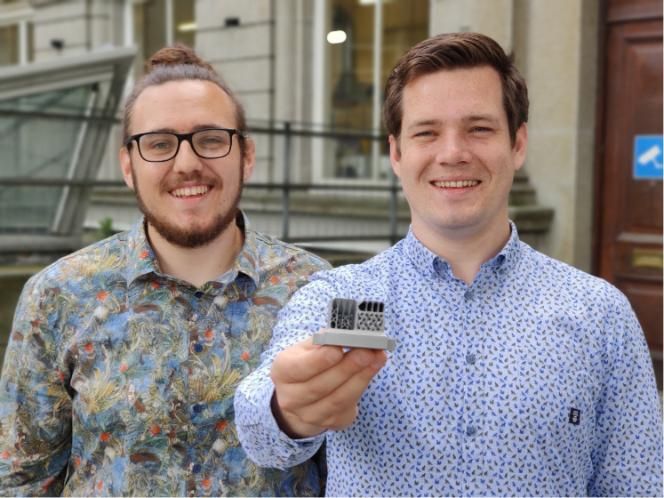 Tadhg and Eoin with their innovative heatsink design.

All projects were evaluated by a judging panel consisting of industry experts from nTopology, EOS, and Lockheed Martin, and the brothers’ design was first choice, based on level of innovation, use of nTopology software, potential impact, and manufacturability.

“The heatsink solution Tadhg and Eoin created provides an excellent example and we are very proud of their success in a global competition.”

Eoin, who graduated from Trinity’s School of Engineering with a Masters in 2019,  travelled to San Diego to represent the team at ITherm – an international conference during which large multinationals such as IBM, Intel, and Microsoft come together with researchers to discuss the latest developments in cooling technologies for electronics.

Tadhg has been part of the Formula Trinity team (see this article for a recent feature), where for the past 12 months, he has been the Head of Engineering. Next year he will take part in the Unitech International Programme, which involves an academic exchange at RWTH Aachen and an industrial placement with a Unitech Corporate partner.

The team thanks Mark Hartnett from Irish Manufacturing Research for his advice and guidance on the projects.