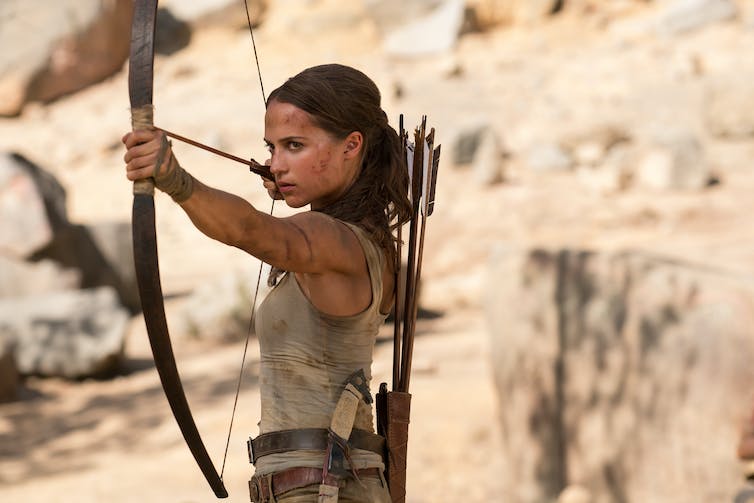 Seventeen years since Angelina Jolie appeared on screens as the avatar-turned-adventurer and an astounding 22 years since the release of the original video game, Swedish actress Alicia Vikander is continuing the franchise in the blockbuster reboot of Tomb Raider.

The latest reincarnation of Croft is intelligent, athletic and primed for action. However, this time around filmmakers have thankfully ditched her previous shorts and crop-top for utilitarian trousers. It’s a welcome change, especially in light of the claims of over-sexualisation of Karen Gillan’s character in the recent Jumanji 2.

As the original “tomb raider”, Lara’s relationship with archaeology is just about as precarious as the many situations in which she finds herself. Over the decades, in various film and game adaptations, Croft has either been an archaeologist in her own right or has been charged with continuing a quest left to her by a male archaeologist relative – this time her deceased father (played by Dominic West). The film’s action begins with the opening of his tomb – Croft entering a hard-won code to gain entry into what reveals itself to be her father’s secret study, a space resplendent with pseudo-archaeological figurines and antiquarian-style boxes.

In a recent interview, Vikander talked of “mystical doors being opened” in the remake. Certainly the trailer itself is packed full of cryptograms which Croft must crack in order to find out about her late father’s legacy. Yet there is little digging, data or discourse in a franchise which centres around a character who is frequently referred to as an “adventurer-archaeologist”, shooting and sparring against the backdrop of Indiana Jones-esque ancient tombs.

However, although “raiding” is very much outside the rhetoric of recent practice, archaeologists have more in common with the world of Croft than it might initially appear. Tombs are often sites of contention and conflict and practising archaeology in areas where local populations may be hostile towards the intervention of foreign or official parties can still be disconcerting and indeed dangerous.

Thrill of the chase

British archaeologist Lucy Goodison remembers instances during which locating and cataloguing the rural tomb sites of prehistoric Crete turned nasty. One incident in the early 2000s involved following a dilapidated car down a dirt track at breakneck speed, driven by people who it transpired intended to loot the tomb. Another was being denied help locating a tomb because of Elgin’s theft of the Parthenon Marbles. This unfortunately echoed an incident in which Greek archaeologist Yannis Sakellarakis was shot at by looters caught red-handed while he was approaching the Cretan tomb of Ayia Kyriaki in 1965.

While situations in which archaeologists and real “tomb raiders” come into conflict do not always escalate to the point of shooting, they can take the form of sabotage. Excavators working in Narce, Italy in 2012 experienced instances of slashed tyres and the purposeful vandalism of surveillance cameras erected to discourage trespassing at the tomb sites. This accompanied some destructive episodes of illicit digging under the cover of night, which the excavation director Jacopo Tabolli rather romantically called “the lullaby of the looters”.

Is Lara a looter? She’s certainly not asking anyone permission, but what this remake of Tomb Raider should remind us of is questions of motivation and ownership. “Close the tomb once and for all”, West booms over scenes of Vikander escaping the clutches of sinister rival organisation Trinity, who seek to open it and “start a global genocide”.

Yet strip away the shooting, explosions and stunts and the conflict essentially arises from two opposed groups laying claim to a place of ancient importance, with the tomb existing as a site of contested access and control – an all-too familiar situation for archaeologists working in areas where looting and the subsequent sale of artefacts is a genuine source of livelihood for the local population.

It remains to be seen – however doubtful – whether Croft manages to have a measured conversation with her competitors, but this is where the archaeological discipline differs. The Follow the Pots project seeks to understand the motivations and ideological underpinning of tomb looting in the southern Ghor – a region of Jordan – where the site of Fifa has been left resembling a “moonscape”, scarred by the innumerable holes dug in search of saleable artefacts.

By listening to – and learning from – the narratives of those involved in the illicit removal and sale of antiquities, the project urges archaeologists to “rethink their privileged position of controlling how people value and use the past”. This incorporation of alternative dialogues and ideologies into archaeological practice highlights that, unlike Croft’s new origin story, real “tomb raiding” is not a clear cut case of good versus bad, hero versus villain, but rather a difference in the way in which stakeholders choose to use the material remains of the past.

Audiences worldwide will soon watch Croft desperately trying to close the tomb ominously named the “Mother of Death”. Yet as archaeologists we should aim for the opposite. It is our job to open sites to thorough investigation, public engagement and debate but, more importantly, to enact and perpetuate openness in an acknowledgement of the multiplicity of claims to archaeological heritage. Now that really would be an adventure.