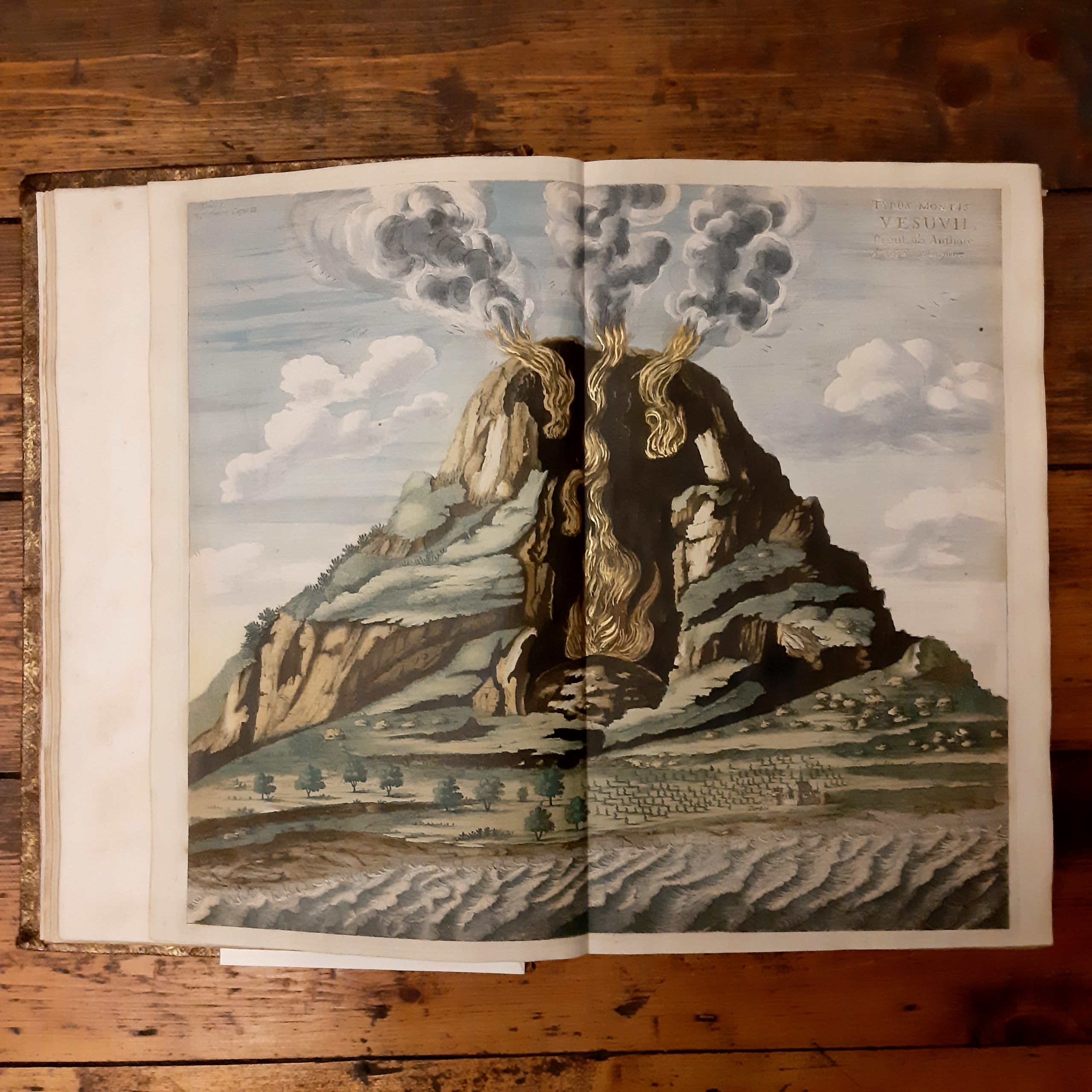 A copy of Athansasius Kircher’s Mundus subterraneus is without doubt one of the most beautiful books in the Fagel Collection. The colouring is of an exceptional quality, initials and captions are heightened with gold throughout the book. Samuel Paterson, who compiled the Fagel auction catalogue for Christie’s in 1802, described it ‘a matchless copy, illuminated in the style of the ancient missals’. Time to take a closer look at this copy. Why did the otherwise so modest Fagels own such a lavishly decorated book?

Athanasius Kircher (1602-1680) was a German Jesuit scholar, a Renaissance man in the seventeenth century, and perhaps one of the last thinkers who could rightfully claim all knowledge as his domain. A true polymath. Kircher published books on volcanoes, hieroglyphs, fossils, China, magnetism, optics, astronomy and cryptography. Not just the breadth of his interests, but also the fact that several books were published in Amsterdam to escape Roman censorship, make Kircher a very interesting figure in the creation and dissemination of knowledge in the seventeenth century.

At least sixteen of Kircher’s books are found in the Fagel Collection, including works on obelisks, music, volcanoes and the illumination and projection of images. The question whether there was a deeper connection between one of the Fagels and Kircher seems justified, but this was not necessarily the case. Kircher was one of the undisputed great minds of the seventeenth century and it not a surprise to come across his books in a private library that was built in, or shortly after, his lifetime.

One of Kircher’s books that was potentially of use for a family that held high office was his work on cryptography Polygraphia Nova. The Fagel archives contain examples of code language that was used by the greffiers in the offices at the States General. Despite the fact that Kircher had personally sent copies of Polygraphia Nova to European rulers, no copy is present in the Fagel Collection.

One of the copies that is found in the collection is Mundus subterraneus. This is an encyclopaedic work from 1665 on earth sciences, arguably a typical Kircher mix of geology and geography, his own field observations, travel reports and classical sources. This is best illustrated by the depiction of the Vesuvius, which not only supports his theory about subterranean networks and chambers of air, water and fire, but also represents his personal experiences in the field. Kircher hired a local guide and descended into the smoking crater to observe and measure the conditions of an active volcano.

The copy in the Fagel Collection is the much enlarged third edition from 1678. It was printed by Johannes Janssonius van Waesberghe, who in 1661 had secured the rights to print all existing and future works of Kircher. The Short-Title Catalogue Netherlands holds a total of 23 different editions of the works of Kircher, most of which are printed by Janssonius van Waesberghe and partners. The Fagel copy of Mundus subterraneus has now been added to the STCN, copies of other works will follow in the course of the project.

The Fagel Copy (Fag.GG.2.3) is bound in dark brown-carmine gold-tooled morocco. The binding has previously been ascribed to the most important Dutch bookbinder Albert Magnus, mainly because of the typical Amsterdam bird-in-vine roll. There are however a number of examples of bindings on the works of Kircher that are similar to Magnus, which have now been labelled the ‘Kircher-group‘.

The copy is beautifully coloured in a style that is very similar to the botanical masterpieces in the collection. Samuel Paterson commented that it is in the style of ancient missals, an expression that he used for other lots as well. Whereas these other lots seem to have come to down to us via other branches of the Fagel family (most likely Cornelis Gerrit Fagel), the coat of arms on this copy points in a different direction. We recognize the arms of the families Van Loon and Bas. The monogram in the corners reads FWVL. This is Frederik Willem van Loon (1644-1708), the son of Willem van Loon and Margaretha de Bas.

We have not yet discovered how this copy ended up in the Fagel Collection, but it is worth noting that the death of Frederik Willem van Loon coincided with the completion of the Fagel mansion at the Noordeinde. There are indications that François Fagel acquired some of the more luxurious bindings in the years after 1708. Did he have bibliophile aspirations for a short while, in an attempt to decorate his newly constructed library with some absolute gems? More research into the built up and provenance of the library is needed before we can begin to answer that question.