Due to some necessary, very noisy, works being carried out in the Old Library building, the Early Printed Books and Special Collections reading room is moving to a temporary home in the Map Library, in the basement of the Ussher Library. The work is scheduled to begin on Monday 4th November and last for at least two weeks. We will take with us all material which is on hold, and there will be Stack and Santry deliveries to the Map Library, although the former may take slightly longer than usual. A small number of books may be unavailable for the duration but we hope this will not apply to many. If you have books on hold and will not want them again, we would be very grateful if you would let us know before 4th November, either by phone – 01 896 1172 – or email – epbooks@tcd.ie – to minimise the amount of material being moved.

Unfortunately, we will be unable to facilitate any classes during this time.

We apologise for any inconvenience this may cause and look forward to welcoming you back to our usual reading room when the noise has abated. Our sister blog Changed Utterly- Ireland and the Easter Rising has been shortlisted for the Blog Awards Ireland! We are shortlisted in two categories ‘Best Art and Culture’ and ‘Best Educational & Science’ Blog. 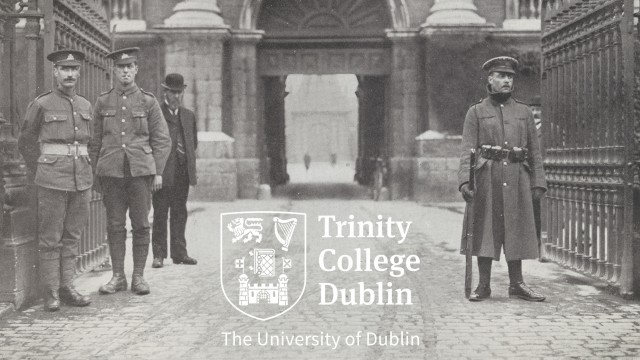 We are absolutely delighted but now need your help as the finalists are decided by public vote. If you like what we do with Changed Utterly, please consider voting for us.

To vote for us in the ‘Art and Culture’ category please click here, and tick Changed Utterly.

To vote for us in the ‘Educational and Science’ category please click here and tick Changed Utterly.

Voting opened on 7 September and remains open for two weeks. We are up against stiff competition from some other fantastic blogs and would really appreciate your support.

Along with our friends in M&ARL, the Department of Early Printed Books will be closed for renovation Mon. 1st July- Mon.5th August 2013 inclusive. No books will be held for readers over this period. In preparation for this some noise in the reading room must be expected. We apologise for any inconvenience. For more information please see the Library alerts blog.

Among the collections in EPB are a lengthy run of plays in the series ‘Dicks’ standard plays’. John Thomas Dicks, born in 1818, advanced his publishing career enormously with the success of ‘Reynolds’s Miscellany’ in 1848. By 1868 the author G.W.M Reynolds was referred to in ‘The Bookseller’ as ‘the most popular writer in England’. Such popularity could only have been beneficial for his publisher too.

By the mid-1860s Dicks’ cheap reprints of Shakespeare led to another expansion of the flourishing business. Around the same time he began publishing ‘Dicks’ standard plays’. Over 1,000 titles were published over a twenty year period –averaging more than one a week! The library copy of ‘List of Dicks’ standard plays and free acting drama’ (London: ca. 1884) identifies Shakespeare’s ‘Othello’ as being the first play in the series. Irish interest was heavily represented early on with R.B. Sheridan’s ‘School for Scandal’ (#2), ‘Pizarro’ (#15), ‘The Rivals’ (#18); Oliver Goldsmith’s ‘She Stoops to Conquer’ (#4) and Charles Macklin’s ‘The Man of the World’ (#16). Drama scholars today are thankful to John Thomas Dicks as in many cases his publications are the only source that remains of some of the lesser known works.The publishing format included an illustrated paper cover, often pink in colour, with a repeat of the illustration on the title page. The verso of the title page shows costume and stage direction. The printing was done in two columns per page.

Dicks died in France in 1881. However, John Dicks Press Limited continued to publish up until 1963.

Holdings of the series in the Department are chiefly located at 149.u.166-182. See our online listing for more details.

The television station Sky Arts has in the past devoted air time to programmes related to Ireland and its literary heritage, most notably Mariella Frostrup’s ‘The Book Show’ which broadcast from Kinsale Arts Week in 2011. This week the station is showing a documentary on one of our favourite artists, Harry Clarke. The documentary entitled ‘Harry Clarke: Darkness In Light’ goes out on Saturday 5th May at 2.25 a.m. and again at 9 a.m. It is repeated on Sunday 6th May at 5 a.m. For readers who do not have access to Sky, the Library shop has copies of the dvd for sale priced at €29.99. The Friends of the Library have an interesting lecture planned for next Thursday 26th April at 19.30 in  the Thomas Davis Theatre, Arts Building.