Without question, the highlight of my year in the M.Phil. in Children’s Literature has been time spent in the Early Printed Books reading room, researching the Pollard Collection of Children’s Books. The students on my course are lucky enough to have a tour arranged by our lecturer, but don’t let a lack of formal orientation stop you from finding your way up there. Marvelous things await your visit. END_OF_DOCUMENT_TOKEN_TO_BE_REPLACED

As a new term begins, for some it is the beginning of a new life, or at least a new chapter. This can be such an exciting time, but we understand how daunting it can be, too. So we thought we’d tell you a bit about the Early Printed Books and Special Collections reading room and what you can expect when you visit us. END_OF_DOCUMENT_TOKEN_TO_BE_REPLACED

From next Monday, 12th November, until Monday 19th, we regret that there will be some disruption to our readers due to work being carried out on the CCTV system throughout the Old Library building. END_OF_DOCUMENT_TOKEN_TO_BE_REPLACED

As the Early Printed Books reading room opens at 10am daily, and department staff are here earlier than that, the hour between 9 and 10 can be used for class teaching, and we welcome this opportunity to share our collections with a wide range of undergraduates and postgraduates. A member of EPB staff will give an introduction to the reading room and our reference collection if required, then the group tutor is free to teach using original materials which students might not otherwise see.

If you are a lecturer and would like to use these resources, please contact the department on ext.1172 or at epbooks@tcd.ie to arrange a suitable date. END_OF_DOCUMENT_TOKEN_TO_BE_REPLACED

On Tuesday 8th March, Dr Rosie Lavan from the School of English held an undergraduate class in the reading room. The students were examining twentieth-century material relating to Seamus Heaney, partly for their course work and partly in preparation for one of the first student-curated small exhibitions in the Long Room. This exhibition marks the fiftieth anniversary of the publication of Death of a Naturalist, Seamus Heaney’s first collection of poetry.

END_OF_DOCUMENT_TOKEN_TO_BE_REPLACED

Two of our regular visiting researchers, Professor Andrew Pettegree (a Long Room Hub Fellow) and Arthur der Weduwen, both from the University of St. Andrews School of History, have been living in the reading room for the past fortnight, working their way through about 2,500 pamphlets in the Fagel Collection and identifying, with a hit-rate of 12-13%, unique copies for the Universal Short Title Catalogue, of which Andrew is director.

END_OF_DOCUMENT_TOKEN_TO_BE_REPLACED

The Reading Room in Early Printed Books and Special Collections is now open again after a two-week closed period. Staff were busy over the fortnight with an audit of the collections, relocation of material and general housekeeping tasks. Also, the upgrade of our fire detectors was timed to coincide with the closure – as you can see from the image this was not a simple task! Please see our opening hours here 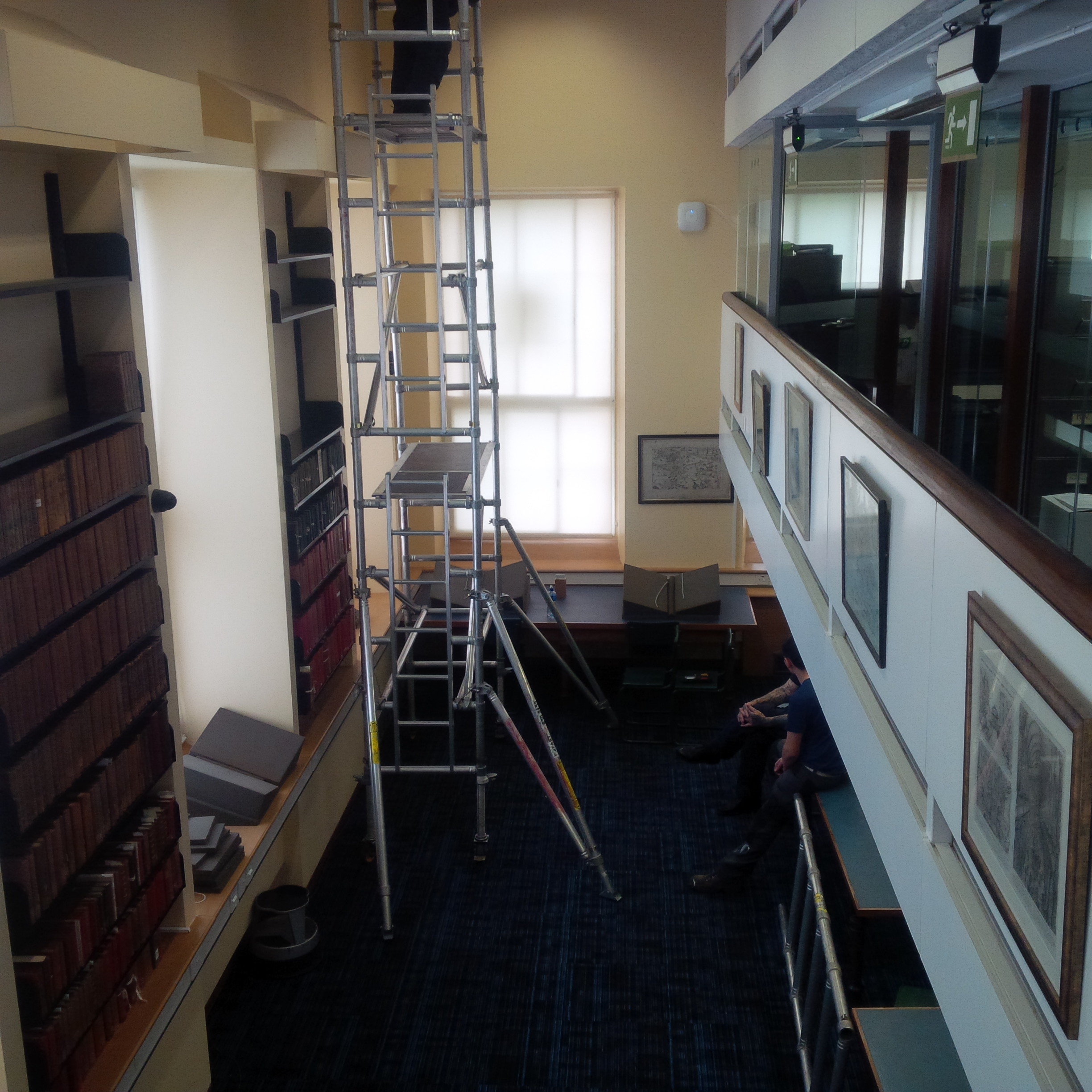 Originating in Germany and usually placed inside the front cover, a bookplate is a printed label used to indicate ownership of a title. Specimens can range from simple printed names to elaborate heraldic engravings and as such can attract enthusiasts for their workmanship, rarity or perhaps just the connection with a famous former owner.

The Department was pleased to host thirteen members of The Bookplate Society on their recent visit to Dublin. Initially greeted by Anne-Marie Diffley who guided them through the Long Room, members then viewed a selection of bookplates from our holdings in the Henry Jones Room.

A highlight of the display was a scrapbook of Trinity prize bookplates compiled by Thomas Sadleir (1882-1957), former assistant librarian at the King’s Inns library. Trinity introduced these bookplates on volumes given as prizes in 1732. Other examples on show to our visitors included the bookplates of Dermot Robert Wyndham Bourke (1851–1927), John Kells Ingram (1823-1927), Oliver St John Gogarty (1878–1957) and Count Daniel Charles O’Connell (1745–1833), uncle of political leader Daniel O’Connell (1775-1847).

Bookplates can amass their own individual history such as that of Gilbert Nicholson of Balrath, Co. Meath (1620-1709) which was inserted in Horace’s Works published after his death in 1737. The design of the plate may be attributed to William Jackson (fl. 1698-1714), and the bookplate is dated 1669 to commemorate the year in which Nicholson acquired the Balrath property. Its provenance doesn’t end there as it further extends into the 19th century with the addition of John Armytage Nicholson’s (1798-1872) signature.

For our readers keen to learn more about bookplates, we have a selection of printed resources on open access available for consultation in our reading room.