Without question, the highlight of my year in the M.Phil. in Children’s Literature has been time spent in the Early Printed Books reading room, researching the Pollard Collection of Children’s Books. The students on my course are lucky enough to have a tour arranged by our lecturer, but don’t let a lack of formal orientation stop you from finding your way up there. Marvelous things await your visit. END_OF_DOCUMENT_TOKEN_TO_BE_REPLACED

As a new term begins, for some it is the beginning of a new life, or at least a new chapter. This can be such an exciting time, but we understand how daunting it can be, too. So we thought we’d tell you a bit about the Early Printed Books and Special Collections reading room and what you can expect when you visit us. END_OF_DOCUMENT_TOKEN_TO_BE_REPLACED On preparing an exhibition on banned books, we knew a certain amount about censorship in Ireland. After a bit more research on the topic it became clear that the banning system failed our now-renowned Irish writers, and denied the Irish public the right to read the very best of literature. The Censorship Board did not set out to ban so many books, but they ended up doing just that. We kept reminding ourselves that it was the 1920s, a Catholic country that was trying to revive its national identity, it was a complex time both at home and abroad. Benedict Kiely, banned, said a prohibition was ‘the only laurel wreath that Ireland was offering to writers in that particular period’. END_OF_DOCUMENT_TOKEN_TO_BE_REPLACED

From next Monday, 12th November, until Monday 19th, we regret that there will be some disruption to our readers due to work being carried out on the CCTV system throughout the Old Library building. END_OF_DOCUMENT_TOKEN_TO_BE_REPLACED

Recently on Twitter there has been a library challenge: 7 black & white photographs of #librarylife, no humans, no explanations. We (@TCDResearchColl – are you following us?) were challenged originally by the Royal Irish Academy Library (@Library_RIA) and subsequently by Waterford Institute of Technology Libraries (@witlibraries). We thought our blog followers might like to see the photographs we posted, perhaps with explanations this time, although most of them speak for themselves. END_OF_DOCUMENT_TOKEN_TO_BE_REPLACED

Do you remember Dr Barrett from my post about Anne Plumptre’s Narrative of a residence in Ireland? The idea for that post arose when I saw his note that the book was “too silly & too ill mannered for a public library” but when I was researching it, the more I read about Dr Barrett, the more I felt he deserved a post of his own. END_OF_DOCUMENT_TOKEN_TO_BE_REPLACED

In January the Department welcomed School of English students from the sophister option ‘Martians, Detectives and Ghosts’ to the reading room with Assistant Professor, Dr. Clare Clarke. The visit gave the group an opportunity to view early editions of core texts related to their course. For more about the visit and to learn what the students thought of their excursion, please see the School of English Facebook page. 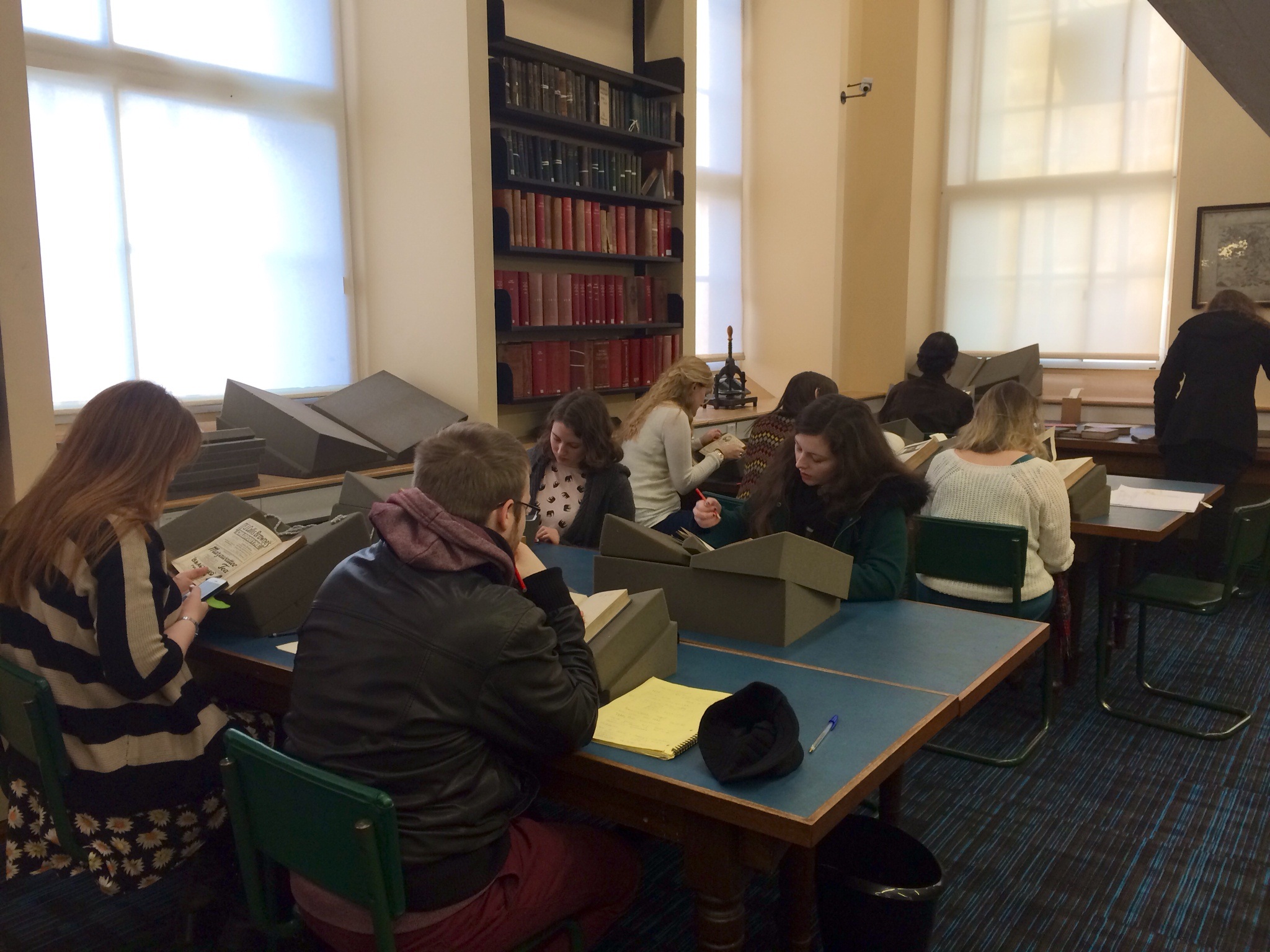 College Librarian, Robin Adams gave the first speech of the evening, paying tribute to Charles’ professional curiosity in all the works under his care, and to the quirkiness that ensured that working with him could never be described as dull. He also alluded to the (organised) chaos that reigned in Charles’ “office” on the gallery of the Long Room, so at odds with the stereotypical view of the librarian presiding over an immaculately ordered domain. Anyone who was privileged to consult Charles at his desk will recognise the truth of that statement!

Professor Andrew Carpenter then paid tribute to Charles’ numerous academic achievements, hailing him as the world expert on the 19th century Irish book trade, particularly emphasising the importance of his Doctoral thesis, and hoping for its eventual publication. (In the meantime, a copy may be consulted in TCD Library.)

Finally Charles took the podium himself, giving a speech that, though witty as always, did not shy away from emphasising the challenges facing Trinity Library in these straitened times.

Charles entered the library in 1968 as a trainee, and joined the staff of the Department of Early Printed Books in 1972, becoming Keeper in 1988. His achievements, both academic and as a librarian, are too numerous to list here, so suffice it to say that his expertise and humour will be sorely missed by the scholars who came to consult him and by his colleagues, particularly those in the Department of Early Printed Books and Special Collections.

We are looking forward to welcoming Charles to the Department as a reader, and to subjecting him to the same strict reading room discipline as he always enforced with such a gimlet eye.