Tool roll at the ready

As Preservation Assistants, we help address some of the challenges and problems affecting the books of the Long Room in the Old Library. The collection of some 220,000 Early Printed Books range from the dawn of the printing press in the 1450s and incunabula, to the end of the Victorian era.  A systematic preservation project, beginning in 2004 as ‘Save the Treasures’, is ongoing today.  The focus of the project is on the cleaning of the books, and the recording of data for use by the Preservation & Conservation Department. We note key information about each book: where and when it was printed, the materials from which it is made, features of the bindings, and so on.  We also carry out a condition report, and note any stabilising treatments we carry out in situ. END_OF_DOCUMENT_TOKEN_TO_BE_REPLACED

As conservators, our job is to conserve Library books but also to preserve them from dust, light, improper handling and fluctuations in humidity, and to protect them during movement and handling. This is why we create made-to-measure boxes for many of the books we treat. END_OF_DOCUMENT_TOKEN_TO_BE_REPLACED

As a Heritage Council intern at Trinity College Library, I have the opportunity to work on several conservation projects supervised by conservators.  Last month, I worked with Andrew Megaw on a book entitled Letters written by the late J. Swift, D.D. Dean of St. Patrick’s, Dublin, and several of his friends. From the year 1703 to 1740. Published from the originals; with Notes explanatory and historical, by John Hawkesworth, L.L.D. In three volumes. A new edition. Volume I. London, 1766, shelfmark OLS L-11-584. END_OF_DOCUMENT_TOKEN_TO_BE_REPLACED

Among the collections in our Library sits a bound volume of tracts (Press B.4.16) by John Milton (1608-1674) with an interesting history. The title-page of the first tract in the volume, ‘Of reformation touching church-discipline in England …’ is complete with a dedication in Milton’s hand to Patrick Young (1584-1652). The inscription can be reconstructed as –

‘To the most learned man Patrick Young John Milton sends these his things, gathered together in one little volume, satisfying himself with but few readers of this kind.’*

END_OF_DOCUMENT_TOKEN_TO_BE_REPLACED

As part of my six-month internship in the Preservation and Conservation Department of the Library of Trinity College Dublin, I recently conserved a book from the Fagel collection, Fag.H.2.65 (image 1).

END_OF_DOCUMENT_TOKEN_TO_BE_REPLACED

As part of my six-month internship in the Preservation and Conservation Department of the Library of Trinity College Dublin, I recently conserved a book, The siege of Tamor: a tragedy by Gorges Edmond Howard, printed in Dublin in 1773, which was probably bound in the Dublin bindery of Ann Leathley (Shelfmark: Armoire R.ll.63). END_OF_DOCUMENT_TOKEN_TO_BE_REPLACED

In 1878, the photographer Eadweard Muybridge proved that while in motion all four legs of a horse could be mid-air at once. His discovery caused a public sensation as this rapid motion could not be discerned by the human eye. By creating a completely new system of high-speed photography, Muybridge had effectively ‘frozen time’. Muybridge’s most ambitious publication, Animal locomotion :an electro-photographic investigation of consecutive phases of animal movements, 1872-1885 (Phililadelphia,1887) is now available for consultation in the Early Printed Books reading room. For this work, Muybridge created 781 motion studies using the sophisticated equipment that he had developed. He could take up to 36 images of a single act; such as walking, jumping, wrestling, knitting or lying on the ground and reading. 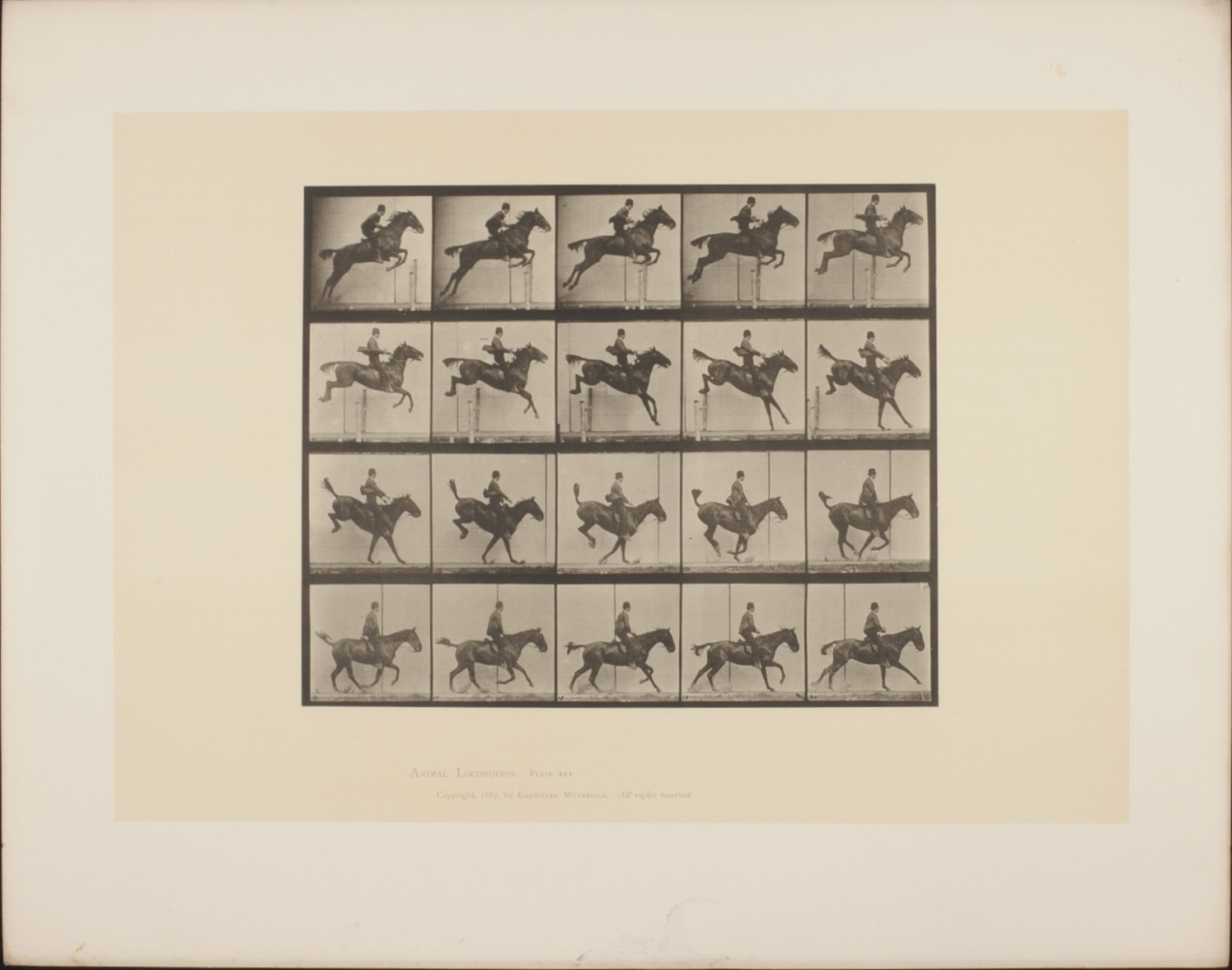 At the time, Muybridge’s work gave him celebrity status, he travelled throughout America and Europe giving public lectures which were a mix of education and entertainment using his motion study images. He projected and animated the images using a device that he invented called the zoopraxiscope. His images and influence have had a far reaching effect in popular culture. Today they are considered to be part of the genesis of cinema.

The photographs were reproduced for publication using the collotype printing process. Invented in the 1850s, this planographic printing process utilises a printing surface created from reticulated gelatin. The publication method of Animal Locomotion was novel. It was possible, of course, to purchase the complete publication. However, many subscribers choose to make a selection of 100 plates at a cost of $1 per plate, which was then issued in a portfolio. Therefore, the Trinity Library copy of publication has the potential to be unique. 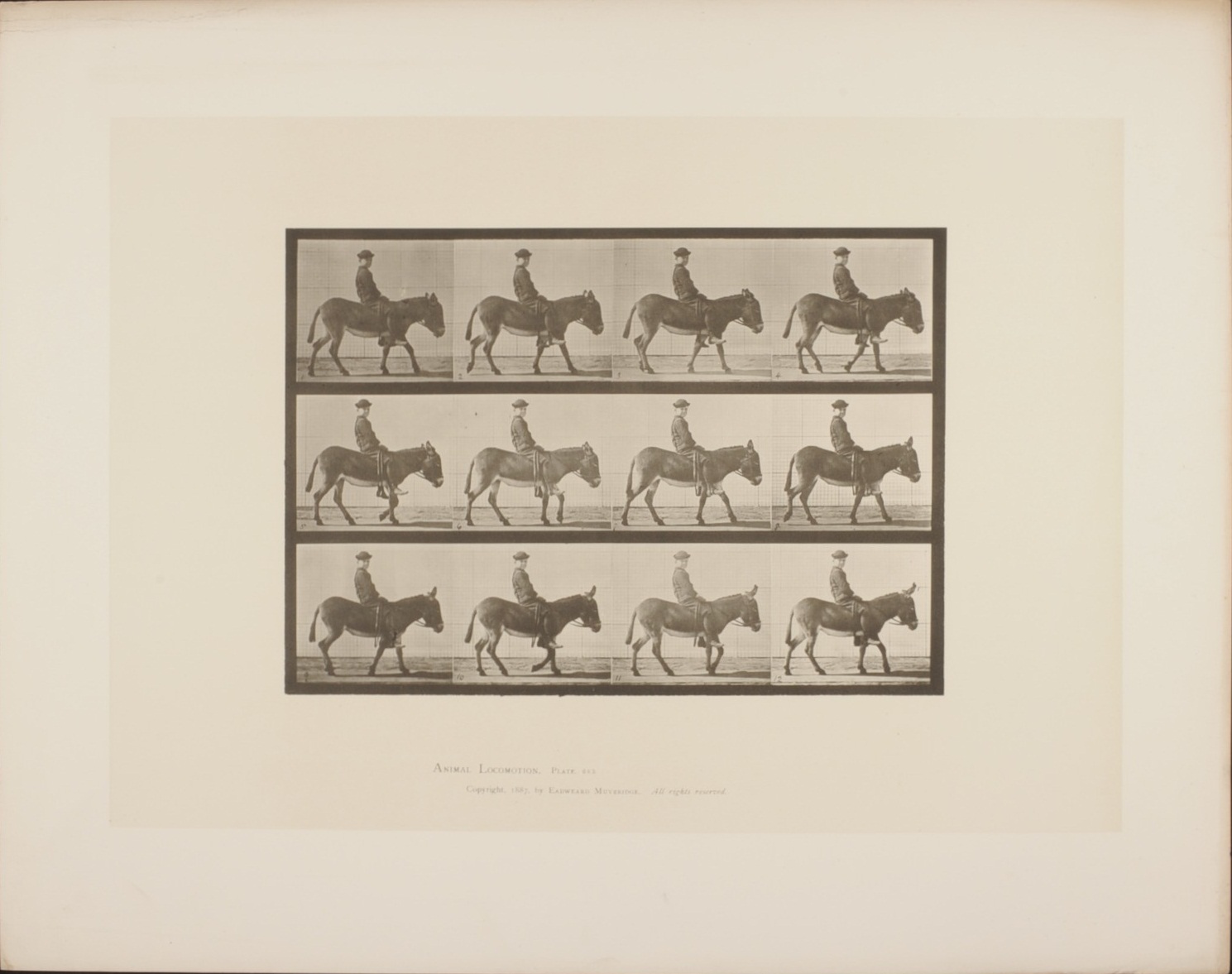 Unfortunately the portfolio which contained the complete 100 plates and title page is no longer extant rendering the printed plates vulnerable. The conservation treatment required to make the collection available was recently completed by Austin Plann Curley, a visiting student from Winterthur-University of Delaware Art Conservation Program and involved cleaning, repairing, documenting and collating the plates. A storage enclosure was custom-made in order to make the collection available to readers and preserve and protect this fascinating publication for future scholarship.

The staff in Early Printed Books, M&ARL and Preservation & Conservation are well used to being called on to curate once-off exhibitions to welcome special visitors and the visitors on Monday 17 June certainly were special. The arrival of the Obama family, which shut down the city centre, was marked in the Long Room with a small but perfectly-formed display of carefully chosen items. First of all Mrs Obama and her daughters Sasha and Malia had the opportunity to see the Preservation & Conservation Department assistants working on the Pollard Collection of children’s books, one of the Library’s great resources, the bequest of a former Keeper. generous co-operation of two of the Library’s sister institutions. The Representative Church Body Library (with the agreement of the National Archives) lent some parish registers recording the birth, marriage and death of various members of the Kearney family (one of whom was named Triphenia) who are believed to have been Barack Obama’s Irish antecedents; and the National Library lent a map of the lands in Co Offaly from which the Kearneys sprang. The other items in the display were hand-coloured prints from EPB’s own collection, and a portrait of John Kearney, Provost from 1799-1806, from the College art collection.’

It was a very enjoyable inter-departmental and inter-institutional collaboration which did the Library proud. Thanks to theobamadiary.com for the images capturing the historic visit.  – Shane Mawe & Jane Maxwell Last Friday the Australian Ambassador, Bruce Davis, accompanied by Meg Johnson, visited the Library. They were met by the Librarian, Robin Adams, and the Keeper of Preservation & Conservation, Susie Bioletti, who first showed them the display honouring ANZAC day in the Berkeley Library foyer and then brought them to the Henry Jones Room where Helen Beaney from the Department of Early Printed Books and Special Collections had laid out a number of items relating to 19th century Australia, including settlement, exploration, birds and mammals. After some time perusing and discussing this material, the party continued to the Long Room to visit the Tercentenary exhibition.

Nanotech scientists in Genoa have developed waterproof paper. The team have created a process that makes paper waterproof without modifying any basic properties of the paper. Is this the future? Perhaps it should come as no surprise that the breakthrough originated in Italy? The flood of the Arno River in 1966 caused enormous damage to special collections in Florence, not least to roughly 1.3m. items in the National Central Library. For more information on the development click here