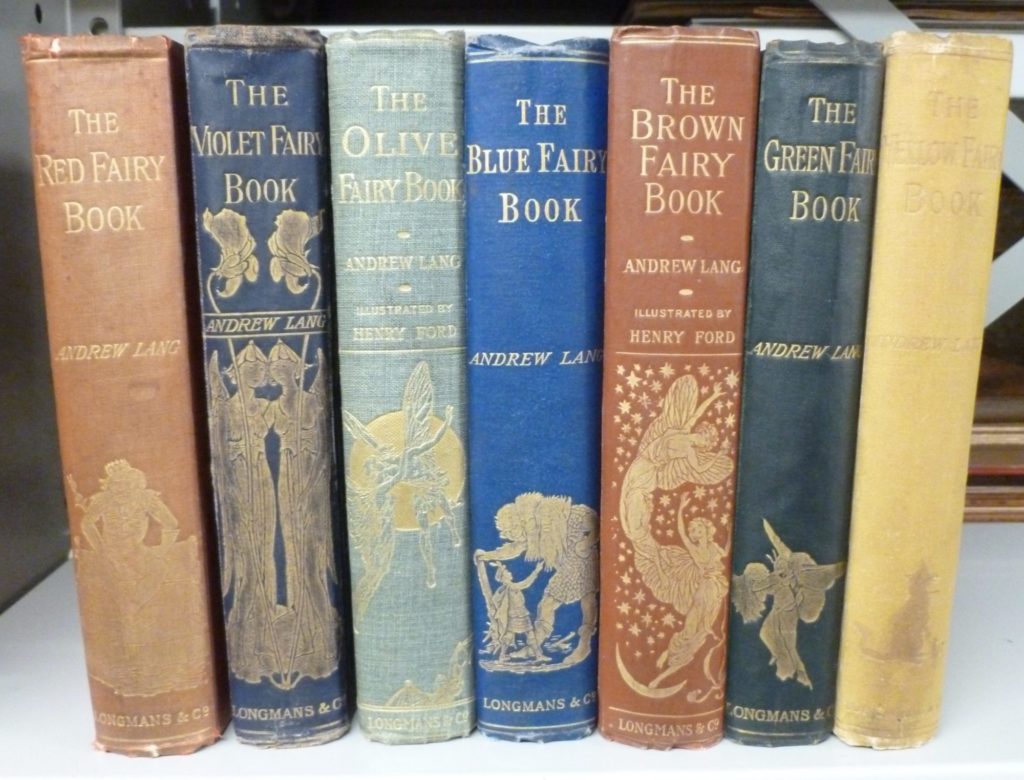 Andrew Lang was born in Selkirk, Scotland, on 31st March 1844. He studied at the Universities of St. Andrews and Glasgow, and Balliol College, Oxford. He was elected to an Open Fellowship at Merton College, moving there in 1869. Lang was prolific in a number of disciplines, such as pre-history, the relationship between myth and religion, and Scottish history, and was particularly prominent in the field of folklore, being a founding member, in 1878, of the Folklore Society, and its president during the International Folk-Lore Congress in London in 1891. He died on 20 July 1912. It is perhaps paradoxical, given the prevailing view at that time that children’s books were not real literature, that he is probably best remembered for his children’s books, particularly the ‘coloured’ series of fairy books. More ironic still, it was his wife who did the majority of the work on these.

END_OF_DOCUMENT_TOKEN_TO_BE_REPLACED

Massive Open Online Courses are a 21st-century phenomenon and have become a popular means of learning, especially in the current worldwide lockdown situation. They are ‘massive’ and ‘open’ because there are no limits to the number of participants and no qualification requirements. With the development of technology, they are a natural progression from correspondence courses. END_OF_DOCUMENT_TOKEN_TO_BE_REPLACED

Due to the current situation, we are all working from home, so we are unable to show you new images from our collections. However, we are keen to maintain our online presence, so do follow us on Twitter and enjoy looking back at previous blog posts. We are also available by email – epbooks@tcd.ie – but obviously there is a limit as to what research we can do to answer your enquiries. We will do our best, of course!

Bibliography, in the sense of the history and description of books, uses a number of words which are not common in everyday life, so we thought some of our followers might find this A-Z useful. Words in italics are further explained under their initial letter. END_OF_DOCUMENT_TOKEN_TO_BE_REPLACED

Communication is at the heart of who we are as human beings and communication disorders reflect the diversity of our humanity. As the Department of Clinical Speech and Language Studies in Trinity College Dublin celebrates 50 years of educating speech and language therapists in Ireland, this exhibition in the Long Room provides a glimpse into eight centuries of communication disabilities. END_OF_DOCUMENT_TOKEN_TO_BE_REPLACED Sometimes it’s obvious that a book has a story to tell before you even look at the text. The volume at OLS X-1-60 is a good example. As soon as it is lifted from its protective storage box, the hand-made brown velvet case begs to be stroked. The initials TW are embroidered on the top; the pink felt lining protrudes; and the cardboard backing shows through where moths have made a meal of the felt. END_OF_DOCUMENT_TOKEN_TO_BE_REPLACED

Recently on Twitter there has been a library challenge: 7 black & white photographs of #librarylife, no humans, no explanations. We (@TCDResearchColl – are you following us?) were challenged originally by the Royal Irish Academy Library (@Library_RIA) and subsequently by Waterford Institute of Technology Libraries (@witlibraries). We thought our blog followers might like to see the photographs we posted, perhaps with explanations this time, although most of them speak for themselves. END_OF_DOCUMENT_TOKEN_TO_BE_REPLACED 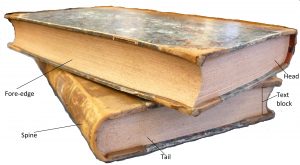 often held securely by a chain fastened to a metal staple on the fore-edge of the wooden board. (There are a few examples in this blog post of libraries which have retained their books on chains and, of course, there were the magical books in the library at Unseen University in Terry Pratchett’s Discworld.) The chain was long enough to reach both the shelf where the book was stored and a sloping lectern* where it could be read. END_OF_DOCUMENT_TOKEN_TO_BE_REPLACED Miniature books, which typically measure less than 3 inches (76mm) in height, have been around since the written word was developed: first with cuneiform clay tablets, then hand-written manuscripts. The introduction of the printing press and moveable type printing in Europe, in middle of the 15th century by Johannes Gutenberg, set the stage for the first early printed books known as incunabula. Surviving editions of miniature incunabules are very rare treasures with only a dozen still in existence today. The new printing process made the production of miniature volumes a challenge to all involved – not just the printers themselves, but also the paper makers and book binders. Readers were also confronted with issues in the reading and handling of these tiny tomes as the size of type and pages kept getting smaller. So why print them? END_OF_DOCUMENT_TOKEN_TO_BE_REPLACED The Chinese court official Ts’ai Lun (often written Cai Lun) is credited with the invention of paper in 105 A.D., although he and his countrymen were almost certainly experimenting for some time before his announcement of their success to the emperor. The manufacturing process did not change much for hundreds of years, until the invention of suitable machinery in the nineteenth century, and is still used to some extent to produce hand-made paper today. END_OF_DOCUMENT_TOKEN_TO_BE_REPLACED