An oft forgotten aspect of the Department of Early Printed Books is its holdings of modern Irish and Anglo-Irish fiction, which can be consulted in the peaceful reading room in the Old Library. As a researcher of contemporary Irish short fiction, I was delighted to find the entire run of The Stinging Fly among the modern Irish holdings. As Shane Mawe, one of the friendly Early Printed Books librarians put it, a Sierra search for ‘Short stories, English Irish authors 20th century’ will return over 250 works held  by the Department , meaning that Early Printed Books is, in fact, a hotspot for contemporary Irish literary culture. END_OF_DOCUMENT_TOKEN_TO_BE_REPLACED Following the Long Room display ‘Power and Belief: The Reformation at 500’ in February 2017, we are delighted to launch the online version of the work, in conjunction with our partner Google Cultural Institute. The exhibition is one of a series of events taking place in Trinity College Dublin, the University of Dublin, marking the 500th anniversary of the Reformation and Martin Luther’s 95 Theses.

The exhibition features the illustrated title page of The Great Bible (1540) which shows, under the eyes of God, Henry enthroned distributing God’s word to Cranmer (on his left) and Cromwell (on his right). Below this, Cranmer and Cromwell, hand the Bible to a priest and a nobleman. Below that again is a rabble of ordinary (though well-dressed) people shouting ‘Long live the King’ and ‘God save the King’. Strikingly, the Bible seems not to have made its way into their hands – none of these lesser individuals holds ‘Verbum Dei’. Visitors to the site can examine in great detail a selection of Reformation works held in the Library including the only known surviving copy of the Maler edition of ‘Enchiridion oder eyn Handbuchlein …’ (1524).

The exhibition is presented by the Library in conjunction with The School of English and The School of Histories and Humanities with thanks to our colleagues in Digital Resources & Images Services and the Department of Conservation & Preservation.

A rare volume from Archbishop Thomas Cranmer’s confiscated library is now on show in the Library of Trinity College Dublin as part of a new exhibition, ‘Power and Belief: The Reformation at 500’. ‘Epistolae quaedam piissimae …’ (1537) by the Czech reformer Jan Hus was once housed in the Library of Thomas Cranmer, Archbishop of Canterbury. The work was last referenced in John Strype’s ‘Memorials of Cranmer’ (1694) as “… in the possession of a Reverend Friend of mine near Canterbury”.  Cranmer was burned as a heretic in 1556 and his books were confiscated by the authorities. The main collection was later absorbed into the library of Henry Fitzalan, 12th Earl of Arundel.

END_OF_DOCUMENT_TOKEN_TO_BE_REPLACED

Among the collections in our Library sits a bound volume of tracts (Press B.4.16) by John Milton (1608-1674) with an interesting history. The title-page of the first tract in the volume, ‘Of reformation touching church-discipline in England …’ is complete with a dedication in Milton’s hand to Patrick Young (1584-1652). The inscription can be reconstructed as –

‘To the most learned man Patrick Young John Milton sends these his things, gathered together in one little volume, satisfying himself with but few readers of this kind.’*

END_OF_DOCUMENT_TOKEN_TO_BE_REPLACED Bibliophile Renier Hubert Ghislain Chalon was born in Mons, Belgium in 1802. A keen numismatist, his interests clearly extended beyond books and coins as he was also the instigator of the Fortsas Bibliohoax, one of the greatest pranks in the world of book-dealing. His hoax was a thing of beauty. END_OF_DOCUMENT_TOKEN_TO_BE_REPLACED

Christmas is a time for homecomings and in EPB we are delighted to welcome back a copy of William Wittich’s ‘A lexicon to Homer …’ (London, 1843). The volume, originally part of the old lending library, has been away for some time. In September we received an envelope containing the book, a note and a cheque for €34 from Arthur Pritchard in Holmfirth, West Yorkshire. Arthur, who graduated from TCD in 1965, had visited the College for the August alumni celebrations this year and thoughtfully brought along the volume which he had recently discovered when clearing out his loft! Unfortunately the Library was closed when he attempted to return the work in person. His humorous note includes a photograph of his valiant effort to return the overdue text. Arthur’s generous cheque more than makes up for any accrued fines! 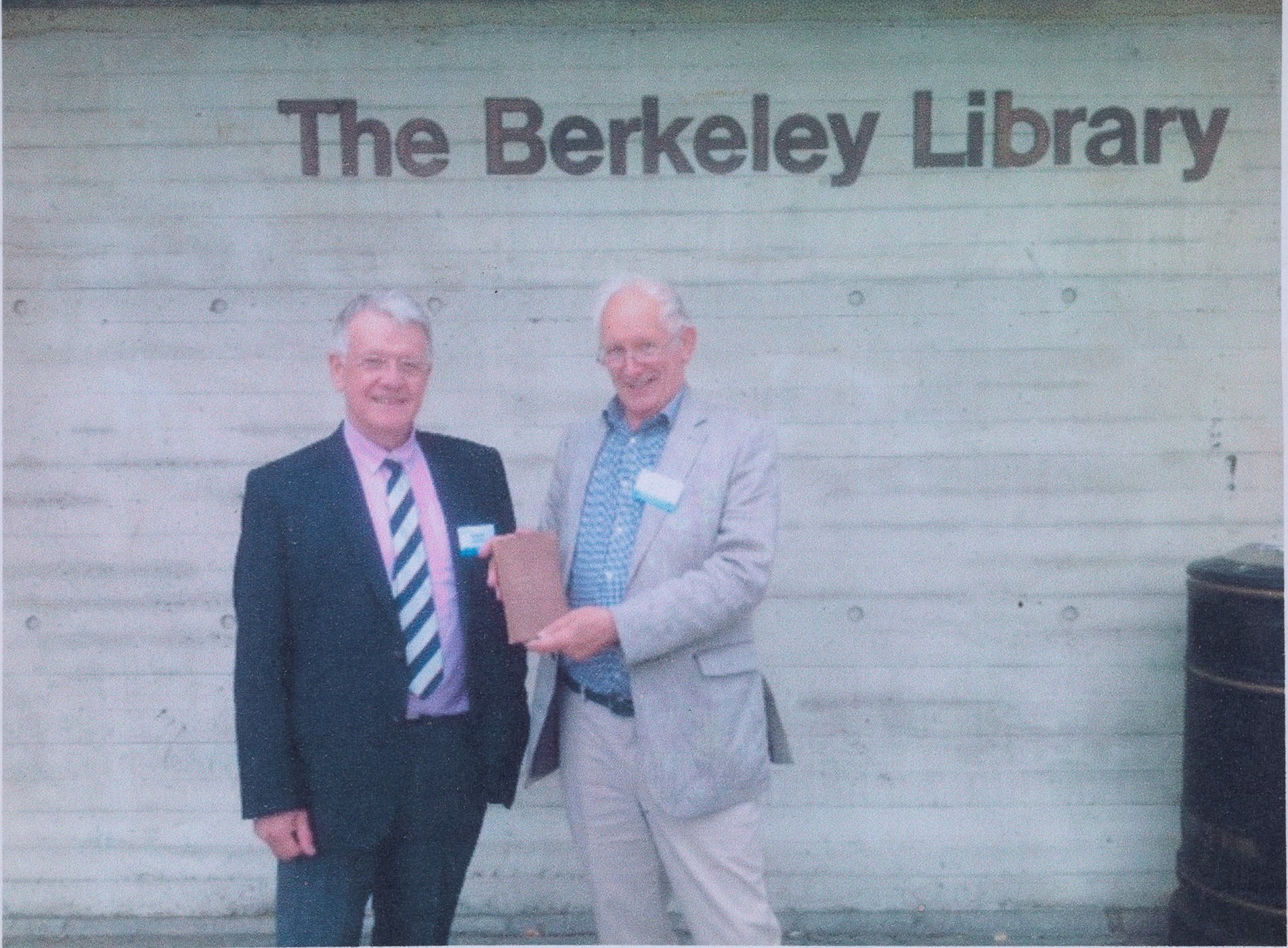 The Department was delighted to host the Masters Students from the Literature and Publishing Group (NUIG) on their recent trip to Dublin. Led by Dr. Rebecca Barr the group also visited the Royal Irish Academy and Marsh’s Library. It was interesting to learn from Dr. Barr that the taught course includes a module on book history and early modern print and manuscript cultures. As well as the working though the modules the students are also responsible for the publication of the annual edition of ROPES: review of postgraduate studies. Busy people! The trip to the library included a tour of the Old Library by Anne- Marie Diffley (Visitors Services) and a presentation by Shane Mawe on the role of the Library with a display drawn from the collections. As a former curate in Camberwell, South London, George Rose (1817-1882) may not suggest the most obvious connection to the successful Brendan O’Carroll character, Agnes Brown. However, after leaving the Church of England in 1855, Rose underwent a major career change and began to adapt and produce a number of plays for the stage under the pseudonym Arthur Sketchley. His big breakthrough came with his fictitious character Mrs. Brown, whose monologues first appeared in Fun magazine on 20 May 1865, one year before Routledge began to issue the works in book form. Running to over 30 volumes the series was a major success. As with the 21st century Mrs. Brown, Rose’s creation was from a working class background and addressed her audience in a humourous and colloquial fashion. Tackling the current topics of the day, titles such as Mrs Brown on the new liquor law (1872) and Mrs Brown on Home Rule (1881) gives an idea of the broad subject matter. Success in print form prompted Rose to return to his artistic roots and tour music halls and theatres globally, delivering Mrs. Brown monologues.Unfortunately in his later years Rose became massively overweight and died suddenly on 11 November 1882.

The Reading Room in Early Printed Books and Special Collections is now open again after a two-week closed period. Staff were busy over the fortnight with an audit of the collections, relocation of material and general housekeeping tasks. Also, the upgrade of our fire detectors was timed to coincide with the closure – as you can see from the image this was not a simple task! Please see our opening hours here The loss of the RMS Lusitania one hundred years ago this week is one of the many World War I tragedies to resonate with war historians and the wider public. Uncertainties regarding the ship’s cargo and the role of its sinking in influencing America to enter the conflict have divided opinion. Shelfmark: OLS Papyrus Case 55a no.9

The impact of the disaster and the familiar image of the stricken ship were not lost on the Department of Recruiting in Ireland who quickly used it to appeal to Irishmen to join the ranks of the army and avenge this wrongdoing.

Less well publicised however is the history of the passenger ship before the conflict. When launched in June 1906 RMS Lusitania was the largest and fastest ship in the world. By 1915 it had crossed the Atlantic over 200 times carrying ca.240,000 passengers. The current display in the Berkeley foyer features a reprint from Engineering which is in itself a fascinating account of the ship’s construction in Clydebank from 1904 onwards. The display also includes two works by former US Consul, Wesley Frost. His role in Ireland during the war included the compilation of reports for the US authorities on submarine warfare in Irish waters. The prevalence of these attacks was noted by Frost –  ‘As Consul at Queenstown for the three years ending last June, I reported to our Government on the destruction by submarines of eighty-one different ships carrying American citizens’. Traveling the length of the Irish south coast, Frost devoted much time to recording the legal testimonies of survivors of such U-boat attacks. He was later recalled, unfairly, in 1917 from his post in Ireland following an alleged complaint by Admiral Sims of his reporting of British destroyers at Queenstown. Tragically, Frost was to lose his only brother Cleveland in 1918 to submarine warfare as the USS Ticonderoga was torpedoed with the loss of 213 lives.

The RMS Lusitania was hit on 7 May 1915, off the coast of Kinsale, by a single torpedo from submarine U-20, killing 1,197 of the 1,960 passengers and crew. Frost helped coordinate relief operations for the survivors as they arrived traumatised on the quayside of Cobh. This experience was to have a profound lifelong effect on him. SM U-20 was responsible for the fate of 36 other ships during the conflict before being grounded in late 1916.