One of the success stories of this year of celebrations around the Berkeley has been a radical change in the use of some of its spaces: the Iveagh Hall, and the basement beneath it. In a nutshell, the Hall was substantially emptied and excellent new seating installed to make a more social space.

END_OF_DOCUMENT_TOKEN_TO_BE_REPLACED

Did you know a TCD library building, that used to face the Berkeley, is now in UCD? Archivist Ellen O’Flaherty from our Manuscripts & Archives Library takes up the tale:

When the New Library was completed in 1967 its west side faced – across Fellows’ Garden – a small building of Portland stone in the style of a classical Grecian Doric temple. This building was known as the Magnetic Observatory, and was built in 1837 by the architect Frederick Darley, under the auspices of Provost Bartholomew Lloyd, for the purposes of conducting experiments in magnetic research.

END_OF_DOCUMENT_TOKEN_TO_BE_REPLACED

Today we’ll look at how computerisation came to the Library catalogue. Thursday 30 November saw a number of events run by the Library to celebrate International Digital Preservation Day. This featured a pop-up museum in the Berkeley Library of (mainly) obsolete computer equipment, including several from the Library’s own collection.

END_OF_DOCUMENT_TOKEN_TO_BE_REPLACED

Over the next few posts we’ll look at some of the challenges faced in creating and maintaining the catalogues that index the Library’s large and ever-expanding collection. Here’s Niamh Harte, an Assistant Librarian with our Collections Management department:

Permanent library clerks were first employed in the 1830s for the purpose of cataloguing our collections, and it took around 50 years’ sweat and tears to complete a list of all holdings. Now known as the ‘1872 Printed Catalogue’, a copy of this eight-volume set is available to consult in the Iveagh Hall, and the reading room for Early Printed Books. An online, searchable version of the Printed Catalogue is also available. [Ed. – the story of how this entered the online world may feature another time!]

END_OF_DOCUMENT_TOKEN_TO_BE_REPLACED

We previously mentioned the steps in the Berkeley’s foyer, which have left an imprint of where they used to be; “ghost steps”, if you will. In this post we’ll talk about ghost signs.

Ghost signs are normally described as hand-painted signs on brick, typically shop names or adverts. Some go beyond this to include all types of defunct advertising signage – for example, Dublin is particularly well endowed with pavement mosaics and inlaid brass signs for businesses, which are left behind when said business closes or moves. The website Dublin Ghost Signs is well worth looking at, or if you prefer your information in good old-fashioned printed form, the book Ghost Signs of Dublin is in the Library for consultation and available from good booksellers.

We didn’t have those sorts of signs up, but we do have the ghostly impressions of where signage used to be. When the Berkeley was opened directional, situational and instructional signage was attached either to the concrete or tiled walls; think of the No Smoking signs or Iveagh Hall sign. The Iveagh Hall letters have little spacers holding them out from the wall, whereas most of the others were directly glued to the walls, with what seems to be a type of rubber cement. It’s impressive that the glue is still holding – they were stuck very firmly in place.

This is all well and good until you need to take them down, perhaps due to a change of use of an area.

Hence, the three missing signs below. The ghostly imprint is of the glue that used to hold them up, and of course is now almost impossible to remove from the concrete. Can you find any more in the Berkeley? Let us know.

Signage and wayfinding is always problematic in any large building, especially one that has been built in several stages like our own BLU Complex; it’s a bit easier if it’s a new building and you are starting from scratch. You can see where attempts have been made to add new signage in the BLU, but they don’t necessarily get far beyond a particular area, meaning that we have several generations of styles that overlap in different parts of the libraries. In an ideal world, all bar the original 1960s signs would be taken down and replaced with a complete set throughout all three buildings in a complementary style (and in English and Irish).

On 13 October we were privileged to welcome the Berkeley’s architect Paul Koralek to speak to a sell-out crowd in the Edmund Burke Theatre, to discuss the Berkeley Library with John Tuomey and other guests.

Luckily, we captured it all for posterity (with decent sound too, thanks to our expert cameraman) – so let’s allow all our guests to speak for themselves. Enjoy!

END_OF_DOCUMENT_TOKEN_TO_BE_REPLACED 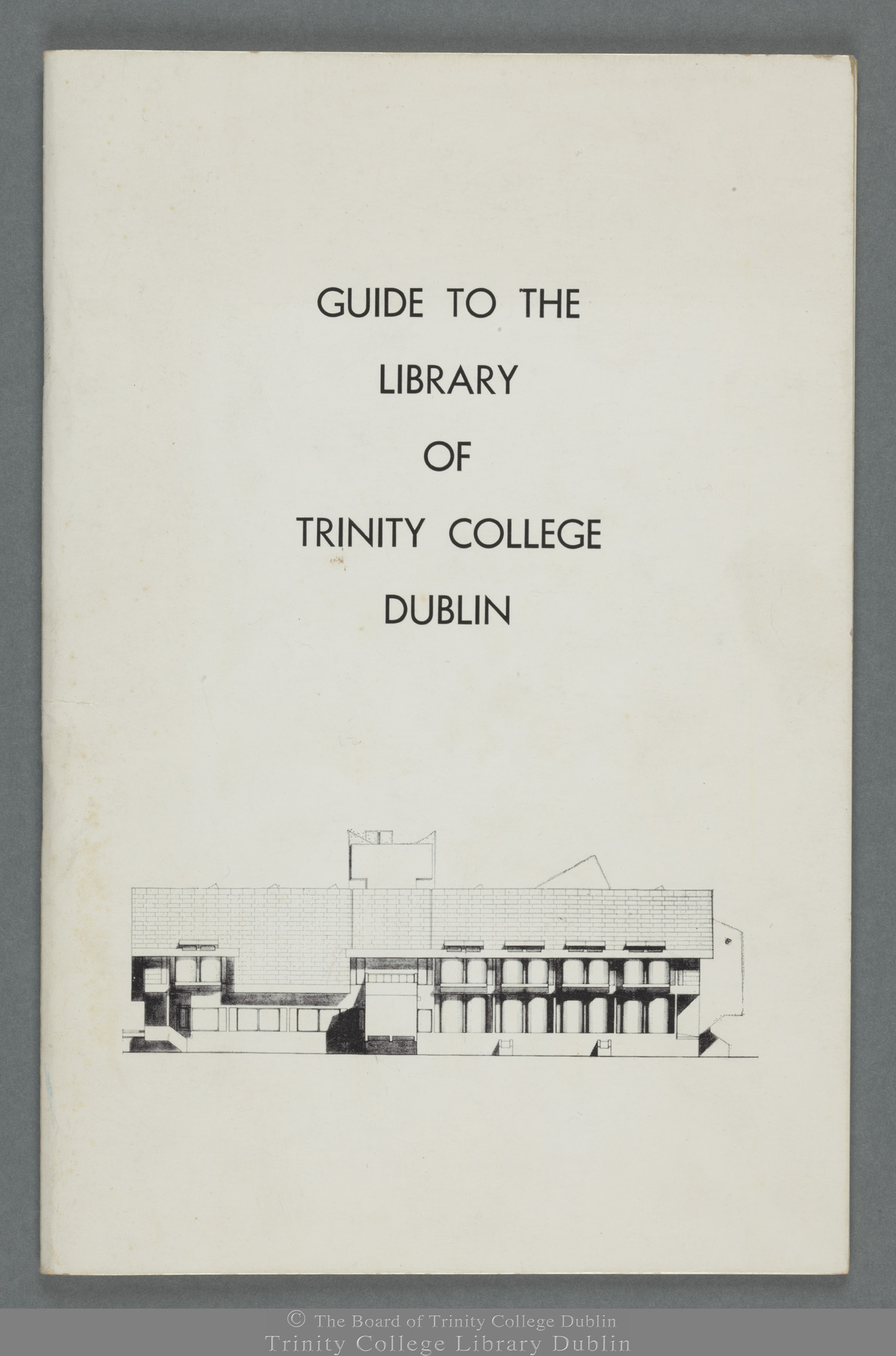 Nearly all libraries produce a guide on how to navigate their buildings and collections, and we have been no exception – at least, in the past. Currently, we don’t really have *physical* guides to the Library, in English at least; we do have a small one produced for our Irish speakers. Instead, we currently rely on our website and online presence to inform our readers… something we may need to revisit, as users often seem to want to have something in their hand they can use, and a website on their phone won’t necessarily cut it.

This lengthy preamble serves as an introduction to the Guide above. Our current readers can note that undergrads were not given borrowing privileges as a matter of course, and had to register and could only borrow from two specific collections. And you thought only being able to borrow LEN-designated books was bad now!

The other aspect that jumps out is suggested by the map which forms our main image, and shows that, despite the New Library opening, how much our collections overflowed into other locations. Modern languages were in the 1937 Reading Room. A medical library was in the Biochemistry Building. The Lecky Library of books was in the Museum Building. Also prominent were temporary prefab huts by the side of the Old Library to hold the Science collections. You can just see the edge of those in this image we featured before, at the top left:

…and also in this aerial photo of Dublin:

… look note other temporary non-Library buildings in Fellows’ Garden-as-was, labelled as a lecture theatre on our plan. No wonder College started planning more building almost before the Berkeley’s concrete was set!

After the Berkeley opened in ’67, it swiftly became part of student life. College was much less crowded, not the huge tourist attraction it is now and with less than a quarter of the students we currently serve, but that figure was increasing and hence Koralek’s original design had been adapted to provide some temporary relief. END_OF_DOCUMENT_TOKEN_TO_BE_REPLACED

This week, we were privileged to welcome the architect himself, Paul Koralek, back to Dublin and Trinity.

The first of his official engagements was to open a new exhibition detailing the design and construction of the Berkeley at the Irish Architectural Archive, curated by Donal Hickey. END_OF_DOCUMENT_TOKEN_TO_BE_REPLACED

Today is a lovely autumnal day in Trinity, like this….

but the nights are drawing in and we all know colder weather is on the way.