Many Equality Fund projects have involved the creation of lasting resources. For example:

"The Trinity Access Programmes held an event on front square on the 05th of April, funded by the equality fund, called the Privilege Walk. The aim of this event was to increase awareness of where privilege can place people in society and specifically showcase the work of the college in trying to support those less privileged

STEM at the Trinity Centre for People with Intellectual Disabilities

This video shows the students at the Trinity Centre for People with Intellectual Disabilities discussing their STEM class (where STEM is Science, Technology, Engineering and Mathematics). The Centre is part of the School of Education at Trinity College Dublin. This video would not have been possible without the support of the Trinity Equality Fund and the Trinity Long Room Hub Research Incentive Scheme.

An overview of the inaugural Trinity career returners event. Set up of a network for graduates looking to access meaningful resources when trying to return to work after a significant career break for family or other reasons. Speakers: Julianne Miles:Co-Founder & Director, Women Returners Carolanne Mc Partlan: Event participant Liz Cleves: Event organiser

International Day for the Elimination of Violence Against Women

A Slideshow of the Removing Pain performance held on 25th November 2010 in Trinity College, Dublin. This performance was created by Brazilian artist Beth Moysés to celebrate the International Day for the Elimination of Violence Against Women. The performance was possible thanks to the support of the women volunteers who participated, Women's Aid and the College Equality Fund.

The aim of this project was to provide accessibility and inclusivity to Deaf and Hard of Hearing students and audiences to theatre performances at The Lir, as performed by final-year students. Three performances were presented with audio description, one of which also had captions. The performances were made available online to audiences globally.

This project shed light on period poverty in the college and provided pads, tampons and menstrual cups in bathrooms across campus. It has started conversations about funding period products nationally in schools and universities.

Defining Disability: Our Stories – Short Film and podcast series. The purpose of this project is to raise awareness of the issues that Trinity students with disabilities face. The Trinity Ability co_op is dedicated to helping make Trinity College more inclusive and accessible to students that have a disability.

The purpose of this project is to showcase the diversity of research being undertaken by the LGBTQ+ community within Trinity while also highlighting the realities of being an LGBTQ+ person in research and academia. The project provides a platform for this community to disseminate their research and experience the wider community outside of Trinity.

The Taste of TAP project aimed to promote participation in Higher Education amongst groups who are currently under-represented. The project focused on one hundred students from linked DEIS secondary schools and one hundred mature students, all from under-represented socio economic groups. This included members of the Traveller Community, people with disabilities and people from ethnic minorities.

This structured one-day event allowed them to try out sample classes to explore subjects of interest to them, explore the campus, find out how to apply, meet staff, and learn about the experiences of graduates who have successfully completed the course.

The key aim of this project was to create a map of Trinity based on the sensory stimuli present in the environments so as to allow easier navigation for people with sensory processing issues.

Project organisers worked together with a team of students from the School of Computing to create a website that would incorporate a map of the campus and a survey to collect data on sensory stimuli present in the various areas of it. The project website was available to anyone using the campus.

‘Overcoming Racism and Sexism in Higher Education – An Interactive Webinar’ took place on Thursday, 18th of March 2021 via zoom, with keynote speeches by Dr Ebun Joseph, Race relations consultant, Director Institute of Antiracism and Black Studies and Chairperson, African Scholars Association Ireland (AFSAI) and Dr Keisha Lindsay, Associate Professor, Departments of Gender & Women's Studies and Political Science, University of Wisconsin-Madison, USA who both spoke about the challenges Black and Ethnic Minority women face in Ireland and the US respectively. Breakout sessions allowed for an interactive discussion of the topic from three perspectives: A staff perspectives breakout session chaired by Dr Ayeshah Emon, a student perspectives session chaired by Mamobo Ogoro, and a refugee perspective workshop chaired by Donnah Vuma.

This project aimed to create resources for families affected by a rare genetic condition called NRXN1 deletion. There isn’t a lot information about NRXN1 deletions that is easy to understand for parents or their children when they receive a diagnosis. The creation of the storybook has impacted families affected by NRXN1 deletions by creating materials to help them to learn about this rare condition together. A feedback survey indicated that not only would families find the storybook useful, but perhaps that it may also be useful for “general public awareness”. The creation of the storybook may help to increase knowledge and awareness of rare genetic conditions and highlight ways to increase understanding of neurodiversity. It is hoped that the storybook fosters the feeling of inclusion for people with NRXN1 deletions. Although it is rare, it is still important to have useful information to help learn about and understand the condition.

A draft of the storybook was presented at an online lunchtime event to families affected by NRXN1 deletions and to get their feedback. The event took place on February 25th 2020, during Rare Disease Week, to highlight the work of this research group on rare genetic conditions and building useful resources to promote neurodiversity at TCD. The storybook content was then finalised based on feedback from families. 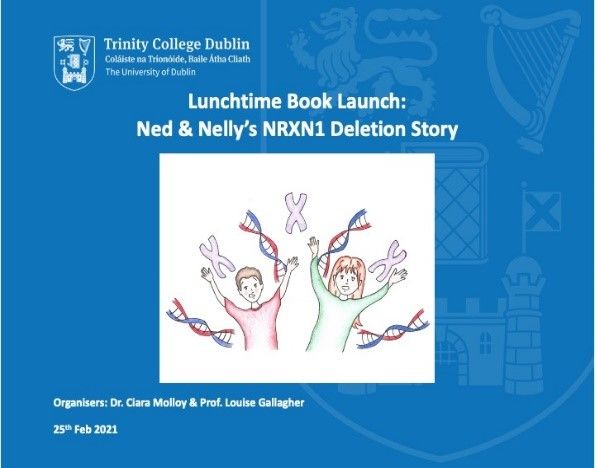 This project sought to identify the challenges in fostering racial diversity in theatre training at TCD and in the theatre industry in Ireland.

The project leaders curated an online panel discussion to which students, alumni and staff of the Lir Academy and members of TCD’s Drama Department gained access. It comprised three conversations, each between a guest speaker and two students or graduates of the Lir Academy, with a round up by a postdoctoral student at TCD. These conversations led to guest speakers forming new, or augmenting previously existing, relationships with the Lir towards further collaborations to enhance diversity in its structures and practices. It has also become a touchstone for discussions around pedagogy and diversity at the Lir. The discussion was also favoured with the first public statement from the recently appointed Artistic Director of the Abbey Theatre, Caitríona McLaughlin, and she has been unafraid to give diversity a central position in her aspirations and plans. All involved have been strengthened in their efforts to create an ethnically more diverse Lir Academy, TCD and Irish theatre ecology.

This project aimed to cherish the beauty of Indian storytelling with Jashn-e-Qalam’s performance of Kamelshwar’s ‘Apne Desh ke Log’ enacted by KC Shankar. The timing of the event was to coincide with India's celebration of the 72nd year of being a Republic on 26 January 2021,with students and professors from Trinity College participating in a theatre performance, followed by a panel featuring Alok Rai - writer, translator and columnist and Prof Ashwani Kumar, co-founder of Indian Novel Collective on utopia and dystopia in literature, Indian literature and translation. The organiser attempted to share her love for literature and Indian stories with the Trinity community by collaborating with Jashn-e-Qalam and Indian Novels Collective.

The aims of this initiative were to:

Twelve participants took part in discussion sessions which allowed them to speak about what was important to them, with some guidance or structure provided to those who wanted it. Accessible and visual material was sent to all participants in advance of the first session to support them in knowing what to expect and to introduce themselves at the first session.

The webinar event, with guest speaker Mr. Adam Harris from AsIAm, opened the audience’s eyes to the challenges faced by autistic students in the university setting and discussed practical ways in which these could be addressed. The strengths and contributions of autistic people to university life were also presented and the range of diversity among autistic students was described.